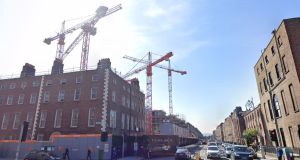 Late 2019 image of Fitzwilliam Street Lower, Dublin: No 29 is one of 11 Georgian buildings planned for conversion, eight for residential use, in the company’s redevelopment of its headquarters. File photograph: Google Street View

A plan to turn a city centre museum into deluxe apartments has been refused.

Dublin City Council has refused planning permission to convert the former Georgian House Museum on the corner of Merrion Square in Dublin, into luxury apartments.

The Georgian House Museum at 29 Fitzwilliam Street, opened in 1991 to celebrate Dublin’s status as European Cultural Capital, was operated by the ESB and the National Museum of Ireland as an exhibition of “Dublin home life from 1790 to 1820”.

The building had been restored by the ESB in 1988 as part of a deal with Dublin Corporation, agreed a decade earlier, to allow the company to exceed standard plot ratios in its expansion of its 1960s office complex.

However, the ESB, through its Commercial Properties division, recently announced plans to convert the building to residential use, saying it was not intended to maintain the building as a museum for ever.

No 29 is one of 11 Georgian buildings planned for conversion, eight for residential use, in the company’s redevelopment of its headquarters.

An Taisce, Dublin Civic Trust and the Irish Georgian Society had all objected to the plan. Minister for the Environment Eamon Ryan defended the scheme, however, saying the conversion of eight Georgian buildings to residential use “has the potential to become an exemplar scheme for Dublin to demonstrate successful city living”.

The Irish Georgian Society said the move would be a “sad and significant loss” to the city’s 18th century heritage. People Before Profit TD Bríd Smith described the plan as cultural “vandalism”.

In its decision, the city council said the loss of the Georgian House Museum “would set an undesirable precedent for the loss of further cultural facilities in the city”. It said the house was part of “a significant cultural quarter adjacent to some of the city’s most popular cultural and historic tourist attractions”.

The council also determined the plan would “reduce the range of cultural and tourist activities in the city core” and would set an “undesirable precedent for the loss of further cultural facilities” in the city.

The museum was temporarily closed in 2017 to facilitate the demolition of the old headquarters and the construction of a new office.