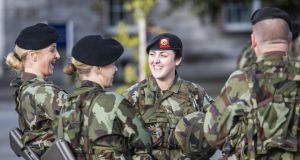 The Defence Forces “must be a more diverse organisation” if it is to move forward, according to an expert on gender and equality at the UN Training School Ireland, where recruits are put through their paces.

While fewer than 6 per cent of Defence Forces members are women, Minister for Defence Simon Coveney said yesterday that the Army, Naval Service and Air Corps should “fully represent” modern Ireland in terms of gender, ethnicity and sexual orientation.

In an interview with The Irish Times, Capt Deirdre Carbery said it was essential for the Defence Forces to boost female recruitment and embrace different ethnicities and sexual orientations if it was to function as an efficient body.

“We need personnel that are reflective of the societies we are operating in. That’s in order for us to be able to assess their particular security threats. There is no point having a 100 per cent male infantry force, or all similar ethnicity or educational background, because a groupthink emerges. If we need to get out into the communities and engage with them, it increases our situational awareness.

“It’s essential for us to have a greater understanding of the cultural context, the religious context, and it’s only through our own personnel interacting with people from different religions, different sexual orientations, that it becomes engrained in the organisation and becomes an integral part.”

However, having engaged on a daily basis with the Lebanese armed forces, she said they were “very open to having a female commander on the ground”.

She said the stereotype of the Defence Forces as a “macho” community was something that permeated society as a whole but that attitudes were changing.

“There are definitely perceptions out there in terms of what it takes to be in the Defence Forces, but I think it’s time to dispel certain myths,” she said.