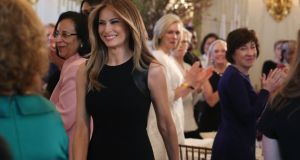 Melania Trump will not be there when Enda Kenny presents a bowl of shamrock to Donald Trump next Thursday. Photograph: Mark Wilson/Getty Images

US first lady Melania Trump is not due to appear alongside husband Donald Trump when he meets Taoiseach Enda Kenny at the St Patrick’s Day ceremony next week.

Mr Kenny and his wife Fionnuala have previously appeared at the shamrock ceremony in the White House alongside former president Barack Obama and first lady Michelle Obama but Mrs Trump will not attend this year.

The current first lady has not played the traditional role of her predecessors, limiting public appearances with her husband to their weekend visits to his Mar-a-Lago resort in Florida.

The Slovenian-born former model is continuing to live at the couple’s home in Trump Tower in New York with her son rather than move to Washington DC.

In a rare exception on Wednesday, Mrs Trump hosted her first solo event at the White House, an International Women’s Day lunch.

Sources familiar with planning for the event attributed the delay to the change in administration.

“It is a new administration coming in. Things are always going to be a little chaotic for the first six to eight weeks,” said one source.

Names of invitees have been submitted to the White House from the Irish embassy in Washington and the US embassy in Dublin.

“All guests should be receiving their invites,” said a White House spokeswoman.

A Sinn Féin spokesman said Gerry Adams, who usually attends functions in Washington on St Patrick’s Day, has yet to receive an invitation.

The spokesman said that is “not unusual” one week out from the event.

Staff from the Department of the Taoiseach have been in touch with their counterparts in the White House.

It is understood, however, there has not been co-ordination on the messages and the words Mr Trump and Mr Kenny will use at various events on the day.

Irish-American businessman Brian Burns, whom Mr Trump has said wants to be his ambassador to Ireland, said he would be attending the White House ceremony.

Still awaiting his official nomination to be Mr Trump’s Irish envoy, Mr Burns said he filled out the last of the documents requested by the White House and attended an interview this week.

Mr Burns wrote to Mr Trump in early January telling the then president-elect that while confirmation would involve “a series of official procedures”, he felt it “wise and prudent” for the US ambassador “to be well-versed on the critical issues that he post will demand”.

The concerns included “post-Brexit Ireland in Europe”, “the economic position of US companies headquartered in Ireland” and the Northern Ireland peace process, wrote Mr Burns in a letter seen by The Irish Times.

In what appears to be a handwritten response from Mr Trump returned to Mr Burns at the top of his own letter, the US president wrote: “Brian, you will be great – Donald.”