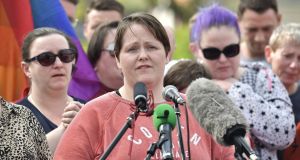 The partner of murdered journalist Lyra McKee has called for the British government to legislate for same-sex marriage in Northern Ireland.

Sara Canning, whose partner Lyra McKee was killed by the New IRA in Derry last month, said with Stormont collapsed since January 2017 it was time for the British government to step in.

“Lyra and I wanted to get married, surrounded by our families and friends, because we shared a love which meant we wanted to spend the rest of our lives together,” said Ms Canning.

“It is unbelievable, and simply unacceptable, that in 2019, this discrimination is allowed to continue in any part of the UK or Ireland,” said Ms Canning.

She said she made these very points to the British prime minister when she spoke to her at McKee’s funeral in Belfast. “And that’s what I will be saying at the march for marriage equality in Belfast. I hope the prime minister is listening,” she said.

“Couples like Lyra and I should not have to wait a day longer for the law to recognise us as equals.”

Patrick Corrigan, Amnesty International’s Northern Ireland director and a member of the Love Equality campaign which is organising Saturday’s march, said Stormont had proved incapable of “delivering marriage equality for the LGBT community, despite massive support among the Northern Ireland public for a law change”.

“The UK government likes to champion its record on LGBT rights, but has shamefully ignored cross-party calls for progress on same-sex marriage in Northern Ireland,” he said.