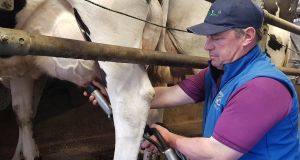 Dairy manager Peter Taaffe said milking the last of the cows would be a sad occasion, but stressed that the gloom would be tinged with relief.

The herd on what is believed to be the only commercial dairy farm in Dublin will be milked for the last time this morning after which the stock is due to move on to a more rural setting.

Once the milking machines are silenced at the Guinness-owned Knockmaroon Farm in Castleknock the curtain will fall on a type of farming that stretches back hundreds of years, almost to the birth of the city.

The dairy farm on the fringes of the Phoenix Park has been operating under the stewardship of the Guinness family for more than 100 years. It once produced milk for Queen Victoria’s table and for generations of Irish presidents.

Until the family decided to sell the herd, this 21-hectare farm was milking 50 cows in the winter and 40 in the spring, with another 100 dry stock on the land.

This is a working farm . . . in a suburb of Dublin and the traffic around here at rush hour is just terrible

However, a quota of 450 litres a day has long made it hard to keep the farm operating as a commercial entity while difficulties associated with farming in a city presented the owners with insurmountable headaches.

The farm’s dairy manager Peter Taaffe, who has been working on Knockmaroon since 1991, said milking the last of the cows would be a sad occasion but stressed that the gloom would be tinged with relief.

The 51-year-old said he looked forward to not having to deal with traffic congestion or moving cattle from field to field through a busy urban setting.

“This is a working farm . . . in a suburb of Dublin and the traffic around here at rush hour is just terrible,” he said. “It can be a real nightmare.”

He noted that even moving the cows across roads had become “a high-risk game, particularly as our society has got more litigious”.

He said that because of its location – hemmed in by the Phoenix Park, Castleknock College and hundreds of homes – expansion was impossible, which meant the family had little option but to sell the herd.

While the herd, sold at auction in Co Meath earlier this month, will soon be finding another place to chew the cud there is life in the old farm yet. “We will keep the dry stock on the land and when you work on a farm there is always something to do, so we will be kept busy,” said Dublin’s last dairy farmer.