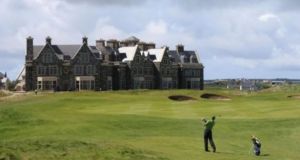 There are fears among locals that the Trump organisation may pull out of Doonbeg, after Donald Trump’s Co Clare golf resort lost its bid for planning permission to build a sea wall to protect the course from coastal erosion.

The State’s planning appeals board, An Bord Pleanála, ruled it was not satisfied that the proposed development would “not result in adverse effects” to the dune structure at the course.

In response to the appeals board ruling, general manager of Trump Doonbeg, Joe Russell said: “We are very disappointed and are considering our options.”

Local businesswoman, Rita McInerney said on Wednesday that she is “devastated” over the decision. She added, “I’m shocked, upset and surprised at the decision and I’ve been in touch with others here today and there is a real fear locally that Trump may now pull out of Doonbeg”.

The €40m plan includes 53 holiday homes, a ballroom/function room, a leisure centre and a new restaurant.

Chairman of the Doonbeg Community Development Co and local farmer, John Flanagan stated that the An Bord Pleanala decision “has ripped the heart out of us”.

Mr Flanagan stated that he fears the long term consequences of the decision is to make the resort unviable to run.

He said: “If that happens, it will destroy west Clare with 300 jobs lost.”

The rejection of Trump Doonbeg comes more than three years after the golf resort first sought to protect the golf links course with a 38,000-tonne rock barrier at Doughmore beach.

The resort started plans in December 2016 to build the sea wall. In December 2017, Clare County Council gave permission to the resort, subject to conditions, to place the rock to protect the loss of the dunes from the coastal erosion during storms on the Irish west coast.

The decision was appealed to An Bord Pleanála by a number of parties including Dublin-based environmentalist Peter Sweetman, An Taisce, and a local surf club and beach community group.

The resort had warned that a “do nothing” scenario would “bring the viability of the entire resort and its potential closure into question.”

The Trump Organisation, the US president’s family business, employs about 300 people at the resort and is one of the biggest employers in west Clare.

A planned €40 million development comprising a new ballroom, leisure facilities and 53 more holiday homes – roughly doubling the size of the resort – was on hold pending the board’s ruling.

The club told the appeals board that if the natural erosion was permitted to continue to this special area of conservation, some 36 per cent of the dune habitat would be lost over 50 years.

In its decision made released on Wednesday, An Bord Pleanála said the board was “not satisfied that the proposed development would not result in adverse effects on the physical structure, functionality and sediment supply of dune habitat” within a special area of conservation.

The board said as it was “not satisfied beyond reasonable scientific doubt that the proposed development would not adversely affect the integrity of the Carrowmore Dunes special area of conservation” in view of the site’s conservation objectives, it could not grant planning permission.

Mr Trump wanted to build two sea walls at the dunes to protect the course from coastal erosion.

The company had hoped to excavate existing sand and replace it with armourstone protection over a distance of more than 600 metres at the southern end of Doughmore Bay, next to the western part of Trump International Golf Hotel that would have protected the 18th hole of the course.

Objectors had requested a more scaled-down plan but the resort said it has already put in place a managed retreat of the course comprising works at the first, sixth, ninth, 14th and 18th holes.

Planning inspector Stephen Kay raised concerns in his 178-page report about the long lifespan of the wall, the predicted lowering of the beach leaving the high water mark at the defences after 25 years and uncertainty over the long-term maintenance and management of the structures.

Based on these issues, he said the board was “not satisfied” the proposed development “would not have a long-term significant negative impact on landscape and visual quality in the area and on the amenity value of White Strand [the beach at Doonbeg].”

Mr Kay said the board was not satisfied these “potential long-term post-development landscape and amenity impacts are adequately assessed in the EIS [Environmental Impact Statement] and other submissions made by the first party [Mr Trump’s company TIGL Ireland Enterprises Ltd].”

Three winter storms that hit Ireland over the past six weeks – Ciara, Dennis and Jorge – caused further damage to the course.

Meanwhile, Ian Lumley of An Taisce welcomed the decision.

He stated: “This is an important vindication of the need to have an independent national planning appeals body making decisions on a scientific and ecological basis. The golf resort at Doonbeg now needs to work with nature in the future in maintaining the structure and ecological integrity of the dune system.”

One local businessman, Hugh McNally, owner of Morrissey’s bar and restaurant in Doonbeg, reacted angrily to the board’s decision, describing it as “devastating, heartbreaking and detrimental to the future of west Clare and its people.”

Mr McNally said west Clare relies heavily on hospitality, tourism and the Trump resort, and that the board’s decision, which could jeopardise the promised €40 million investment in the resort, would hurt the area economically when the recovery after the coronavirus outbreak comes following pub closures in the pandemic.

“The fear for us all now is that many will not reopen in light of the resort not being able to protect their investment through the protection of the dunes that would allow the continued viability of the resort,” said the publican who is a cousin of Mr Trump’s vice president Mike Pence.

“There is the same fear for many homeowners and farmers also whose homes and livelihoods are under threat due to coastal flooding as a result of these coastal protection measures not being put in place.”