Department of Defence said incident occurred outside of Irish waters 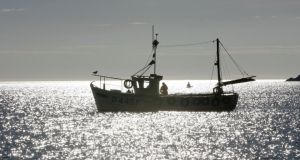 The trawler is the latest in a long line of fishing vessels believed to have been dragged by submarines in the Irish Sea. Archive photograph of a fishing vessel: Alan Betson/The Irish Times

The crew of an Ardglass-based fishing trawler escaped injury when their vessel was towed by a suspected submarine off the coast of Ireland on Wednesday.

The Karen was towed along during the incident nearly 30km from Ardglass on the southeast shore of Co Down. The vessel was badly damaged but the crew escaped unharmed.

The coastguard said the Karen reported a collision at a point known as the Calf of Man not far from the Isle of Man.

The skipper said the boat had been snagged and dragged backwards at speed.

Mr James added: “You don’t need to go long at that until you go under.”

The four crew members worked to release wires connecting the net to the out-of-control trawler, which had been moving slowly forward but was suddenly sent careering backwards through the water.

The vessel made its way back to Ardglass. Part of the deck had to be lifted because it was so badly damaged, and another section was ripped off.

Mr James said: “It is a bloody mess.”

He added he was glad the four crew and everyone else was safe. “The question mark now is what kind of a submarine was it?

“If it was Allied it should have been following an agreed protocol where this should not have happened.

“Our defence forces are not up to much if a rogue submarine of unidentified nationality is tearing around the Irish Sea.”

Paul Murphy, the skipper, said that he sat for five to 10 minutes catching his breath to see if the submarine would surface.

“It was a submarine, it had to be, it could not have been anything else,” Mr James said.

The Department had no comment to make in relation to this incident, which occurred outside of Irish territorial waters.

“The fact that this submarine didn’t even surface to make sure the fishermen were safe has caused considerable resentment in the area. It is totally unacceptable that a submarine would show such contempt for maritime workers.

“The skipper and his crew on the Karen, and indeed all of the local fleet, deserve to know the truth about what happened. Whether this is a British vessel attached to the hugely controversial Trident system or a Nato submarine in training, our local fishermen deserve justice.”

There were several cases of trawlers being towed by suspected submarines off the Irish coast during the 1980s . A Greenpeace study in 1989 detailed 1,276 accidents involving major navies of the world happened since the end of the second World War.

More than 230 of these occurred in the northeast Atlantic.

In 1982, the crew of the Sharegla, a 100-tonne Irish vessel, escaped injury when the vessel capsized and sank after it was dragged backwards for about two miles by the Royal Navy diesel submarine, HMS Porpoise, after becoming entangled in its nets.

In a similar incident in 1984, an unidentified submarine dragged the trawler Oriel astern for two miles off Co Louth. While an official Irish inquiry was held, its findings were never made public.

In 1987, the Irish trawler Summer Morn, was dragged backwards for 10 to 20 miles over two-and-a-half hour s by a US nuclear-powered submarine.

At the end of 1988 the trawler, Strantail, had its net torn to shred s by a submarine north of Tor y Island, and the Royal Navy nuclear-powered attack submarine HMS Courageous collided with and sank the privately chartered yacht, Dairiada, at night in the North Channel of the Irish Sea.