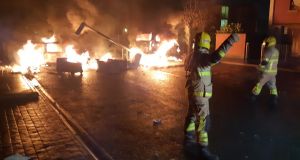 Two cars alight and a fallen lamppost blocking the entrance to an estate in Fortunestown, Tallaght on Thursday night. Photograph: Dublin Fire Brigade/Twitter

Fire officers were confronted with burning barriers and targeted attacks in Dublin on Thursday night as they dealt with almost 700 callouts over the 24 hours of halloween.

The fire brigade responded to 230 callouts during the hours of darkness, with 298 ambulance related callouts as well.

Greg O’Dwyer, assistant chief fire officer with Dublin Fire Brigade, said there has been a downward trajectory in the number of callouts in recent years, with better clearing of stockpiled bonfire materials and better community organised events driving the reduction.

He said that while individuals may have self presented to hospitals, there had been no reports of injuries to members of the public or fire crews.

However, he told The Irish Times that fire crews are dealing with increasingly sophisticated tactics to frustrate their work. In Coolock a car was driven onto a bonfire, while burning barriers were erected in Darndale and elsewhere. In Ballyfermot, a derelict property was set alight.

“What’s left is the hardcore, organising and carrying out these fires. They’re the ones driving cars onto fires and barricading streets,” he said.

Mr O’Dwyer said that fire units attended incidents from earlier than usual today, with calls coming in from around midday as people set bonfires earlier in the day to avoid forecasted rain. He also said rival gangs were setting each others fires alight earlier in the day.

Fire crews came under attack as they attended the scene of several incidents in the city on Thursday evening.

Dublin Fire Brigade said a crew encountered anti-social behaviour as they responded to a report of bins being set on fire in a flats complex off Pearse Street.

Finglas fire station called to a fire in a warehouse in Santry. One fire engine was able to deal with the call, breathing apparatus & a positive pressure fan in use #Dublin #fire #DFBLive #Halloween #halloween2019 pic.twitter.com/fFGqsLRcEE

Firefighters had to contend with rocks and fireworks when they attempted to put out a blaze that had been started at a bin store in Pearse House off Hanover Street East shortly before 6.30pm.

Dublin Fire Brigade later said that firefighters from the North Strand station also had to contend with anti-social behaviour when they responded to two cars on fire in Darndale.

Firefighters from the Finglas station were called to a fire in a warehouse on Thursday night, while fire crews in Tallaght attended the scene after the entrance to an estate in Fortunestown was blocked by the downing of a lamppost and the setting alight of two cars.

Dublin Fire Brigade had already received reports of dozens of bonfires across the city since mid-afternoon, despite wet weather conditions in the city.

One crew had to put out a bonfire which had been lit in the middle of a road and blockaded part of Benbulbin Road in Drimnagh.

A report was also received of a youth attempting to light a gas meter in a derelict house in the Abbotstown Road area of Finglas.

Other units were dispatched to attend to two other reported fires in derelict houses at Raheen Court in Tallaght and Cherry Orchard Drive in Ballyfermot.

Fire officers attending one bonfire at Jobstown Park in Tallaght reported flames more than 40ft high when they arrived at the scene. Dublin Fire Brigade has advised members of the public that its staff are not in a position to dismantle or dampen bonfires that have not been lit.

Reports were also received of a car being driven onto a bonfire in Kilbarrack.

A spokesperson for Dublin City Council said the regional control centre of Dublin Fire Brigade had received 194 reports of fires on Halloween up to 7.30pm, including several chimney fires and fires in derelict buildings.

On what is traditionally the busiest night of the year for firefighters, units in Dublin also handled 367 other emergency calls, including 279 seeking ambulance assistance.

Meanwhile, the Garda Representative Association has condemned attacks on gardaí working on Halloween night in Louth. In one incident a young man is seen pursing a patrol car in the Moneymore estate in Drogheda and then throwing a large firework at it.

A video of this incident was posted on social media. A few hours later a garda at the scene of a house fire in Blackrock, outside Dundalk, came under attack when fireworks were thrown at her. One exploded within inches of her.

Garda Derek O’Donoghue of the GRA in Louth said: “It is terrible that gardaí trying to protect the public on one of the busiest and most dangerous nights of the year are threatened, intimidated and potentially injured.”

“Certain people consider this behaviour acceptable, which it is not.”