External gates at the complex have been reinforced against security workers

About 30 squatters have been living on a site in Grangegorman since August 2013. A sudden attempted eviction took place on Monday the 23rd of March. Video: Enda O'Dowd 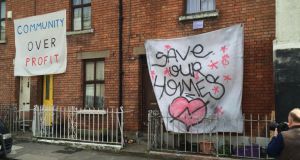 The scene at Grangegorman Road Lower in Dublin where up to 60 people remain in a complex after resisting an eviction attempt on Monday. Photograph: Dan Griffin 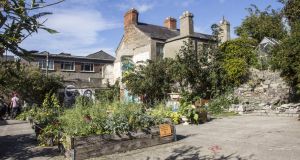 Raised beds that are part of the community garden at the squatted complex in Grangegorman, Dublin 7, photographed in September 2014. Photograph: William Hederman 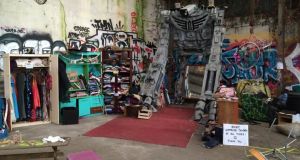 A communal area at the Grangegorman squat. Photograph: Dan Griffin 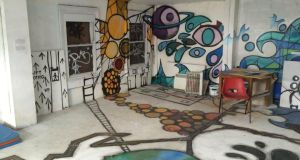 Interior of one of the buildings at the Grangegorman squat. Photograph: Dan Griffin 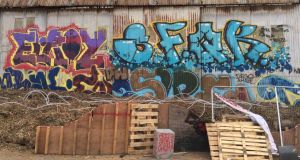 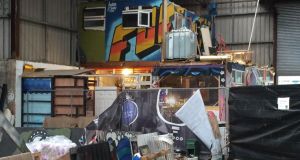 A living area within a warehouse at the Grangegorman squat. Photograph: Dan Griffin 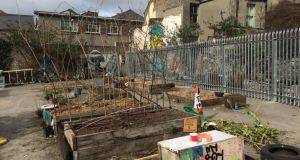 The community garden at Grangegorman with a fence erected by security workers on Monday in the background. Photograph: Dan Griffin

About 30 squatters and their supporters remain in a complex on Grangegorman Road Lower in Dublin after resisting an eviction attempt on Monday.

The people living at the complex, which includes three residential houses as well as a number of warehouses and a large yard, said they have reinforced external gates to prevent security workers from entering.

The site on the capital’s north side has been occupied since August 2013 by squatters who have used it as a residence, community garden and cultural space.

Nama has appointed Ernst and Young as receivers of the site. Attempts to evict the squatters on Monday were unsuccessful when workers who arrived to erect fences on the property were met with resistance.

The receiver will seek a High Court injunction on Wednesday morning to remove the squatters from the complex. Ernst and Young said there is considerable interest in the site and intend to put it on the market with a guide price of €4.2 million.

Squatters live in the three houses on Grangegorman Road Lower while makeshift apartment-type structures have also been set up in some of the warehouses. Another warehouse holds a communal living space and a kitchen.

David White, who has lived at the squat for the past nine months said the plan was to continue to resist eviction and stay at the site. “It’s about time people in Ireland stood up and start taking the empty properties, which are all over this country, and housing themselves,” he said.

A number of people were treated by paramedics during a stand-off at the complex on Monday night.

Workers had arrived to the area in a number of vans early that morning to erect fences but found themselves barricaded into the yard for a number of hours.

At about 9.30pm the workers attempted to drive their vehicles out of the comlex. When the exterior gate on Grangegorman Road Lower was opened and a van tried to leave, the waiting protesters attempted to impede the vehicle and a number were injured.

The windshield of the van was broken, before protesters sat down in front of the vehicle. At about 9.45pm two units of the fire brigade and an ambulance arrived at the scene. Paramedics treated an injured man on the ground before putting him into an ambulance.

At approximately 10.45pm the vehicles - including a number of trucks, vans and cars - left the yard unimpeded when the protesters made way.