Over 1,500 hours of news material recorded between 1996-2004 digitally archived in joint TG4/BAI project 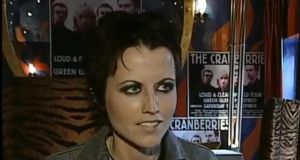 A still from a TG4 interview with the late Dolores O’Riordan who was a student at Laurel Hill Colaiste FCJ where Irish is the medium of instruction. 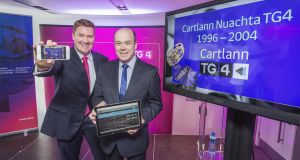 An interview as Gaeilge with the late Dolores O’Riordan, reports from Ground Zero following the 2001 September 11th attacks and numerous local stories from around the country are among an extensive online digital archive of TG4 news bulletins launched in Dublin on Wednesday.

Some 1,500 hours of broadcasting were digitised as part of the project including every news bulletin broadcast by TG4 from the date of its launch on October 31st 1996 to December 31st 2004.

TG4 staff prepared, cleaned and digitised the archive contents which were then digitally catalogued by Gaeltacht-based independent company Europus between May 2016 and July 2017.

The project, one of 22 funded by the €5m BAI Archiving Scheme, was formally launched at BAI headquarters by Minister for Communications Denis Naughten.

The BAI scheme is designed to provide funding for the development of an archiving culture in the Irish broadcasting sector.

Speaking at the launch, Minister Naughten said the BAI scheme has made a “significant contribution” to restoring and preserving Ireland’s broadcasting heritage.

“I am someone who feels passionately that we need to protect this heritage so that we can look back at what has happened over the last 20 years and beyond that but also that the generations to come can do that as well.”

Commenting on the Dublin-centric nature of much of the news that is broadcast in Ireland, Mr Naughten said TG4 offers a different view or súil eile.

“It has to be acknowledged that this was done on very tight budgets down through those 20 years. TG4 was run on a shoestring and yet could provide quality news content, which is always very difficult to do, and it very much tried to be innovative ... and I think it has done a good job in relation to that”

“I was delighted both last year and this year to be able to increase the budget to TG4. We had a discussion earlier on to see how we could maybe increase that further, and leverage TG4 what is doing, to actually stimulate investment in regional parts of this country.”

“I think that is something too that cannot be underestimated,” he added.

The digitisation project has produced a searchable database of bulletins which the public can access free of charge following registration.

“The problem is maintaining them. They do disintegrate and disintegration of tapes means they are lost, and lost forever”.

“Getting those digitised would be of absolute importance to us,” he added.

BAI CEO, Michael O’Keefe, said the BAI was “delighted” to be associated with the project and said he hoped funding would be approved for the next phase of the scheme.

“We have now submitted the review to the Minister and we also have plans for the next scheme and we will be providing funding from the broadcasting fund …we will obviously be hoping that we will get approval for the new scheme very shortly,” he added.

Alan Esslemond, director general of TG4, paid tribute to the work of outgoing head of news at TG4 Michael Lally.

“The importance of having media in Irish is not about translating other people’s ideas. It’s about tapping into the creative genius of the Irish language,” he said.

“Ireland is almost always viewed from Dublin outwards and very often that view doesn’t get much further than Kildare.

“Michael said Ireland could be viewed from lots of different positions so why don’t we start viewing Ireland from the West, from the North from the South and then see how far we get with that.

“That kind of súil eile has created an archive that is totally distinctive. This is not a translation of a view from Dublin, this is a new view that - without TG4 - would never have existed.”

Readers can register to use the archive at tg4.ie/cartlann.