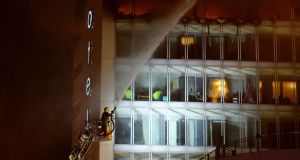 The votes of no confidence were taken at an emergency meeting held last Saturday in the wake of a large fire at the Metro Hotel in Ballymun last Wednesday.

Siptu said the fire “starkly illustrated” their repeated demands for high rise fire fighting training as well as the provision of adequate resources and risk assessments.

Siptu sector organiser Brendan O’Brien said “policy makers and management have had many opportunities to resolve the issues raised by our members”.

“We believe no satisfactory improvements have been made despite Siptu representatives continually raising health and safety concerns.”

Siptu DFB convenor Shane McGill, said “these votes of no confidence come directly from our members”.

“They are front line fire fighters working in fire stations and control rooms across Dublin city and county and they have had enough.

“These members are not only disillusioned and angry with the policies and the direction management has taken so far, but how they have continually turned a blind eye to the concerns of operational staff and the representations made to them about training, safety, safe systems of work and exposure to risk.”

However, Minister for Housing, Planning and Local Government Eoghan Murphy expressed his full confidence in the work of the two officials. “People will be surprised at this evening’s statement from Siptu, Mr Murphy said.

“Anyone who has seen the role that Sean Hogan has played in leading the country’s response to many national emergencies, most recently in relation to snow storm Emma at the beginning of this month, a role that I have witnessed first-hand myself, will recognise Sean’s extraordinary leadership ability, his sound judgement and sheer dedication to public service and public safety.

“Pat Fleming and Sean Hogan have made an extraordinary contribution to developing and implementing fire safety policy in their various roles in leading local authority delivered fire services in this country.”