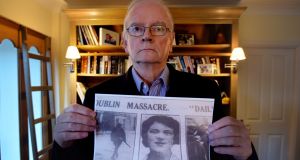 Richard Staveley holds a photo of his grand-aunt Jane Boyle, shot dead on November 20, 1920 . A headstone is to be inaugurated in Glasnevin today in presence of family members and GAA president. Photograph: Alan Betson

On the day of her death, it must have seemed to Jane Boyle that life could not get much better.

There she was, arm-in-arm and pressed up against Daniel Byron, the man she loved – the man she would marry in five days’ time. And they were in Croke Park for what promised to be a cracker of a game: Dublin versus Tipperary, billed as the “great challenge match”, the proceeds of which would be donated to the Irish Republican Prisoners Fund.

What happened on that Bloody Sunday became part of the narrative of Ireland’s progress towards statehood the cauldron of the War of Independence that led to the Anglo-Irish Treaty of December 1921 and the setting up of the Irish Free State in March 1922.

Bloody Sunday was perhaps the single most convulsive event leading to the Treaty.

In the early hours of November 21st, IRA men set loose by Michael Collins went about killing members of the so-called Cairo Gang – a group of Dublin-based British intelligence agents, comprised of army officers and members of the Royal Irish Constabulary, whom Collins believed were out to kill him and other IRA leaders if he didn’t get them first.

At dawn, at 10 locations around Dublin city centre, IRA men burst in on sleeping members of the gang and shot 19 of them. Fourteen died immediately, a 15th some days later. The operation inflicted a truly crippling blow on Britain’s efforts to quell the military campaign for independence.

The great challenge match in Croke Park a few hours later became the focus for what seems certain was an act of revenge.

Croke Park then was nothing like today’s 21st century stadium. But it was crammed nonetheless with 10,000 spectators when, shortly after throw-in at 2.45pm, a group of policemen and army cadets, led by an officer of the Auxiliaries (a paramilitary police force) entered the ground and began firing indiscriminately.

The bullets that ripped into the crowd killed 14 people – 12 men; a 14-year-old boy, William Scott; and Jane Boyle, who was killed by a single bullet that hit her in the face. The bullet appears to have passed through her clothing.

Immediately afterwards, Dublin Castle said Jane had been crushed to death in the melee that followed the shooting and the British authorities soon whitewashed the affair, exonerating those responsible, insisting, without evidence, that they had been fired on first by gunmen in the crowd.

Thereafter, Jane Boyle was largely forgotten – until next Saturday when, she will be acknowledged properly, largely due to the efforts of her grand-nephew, Richard Staveley of Sandymount.

Staveley began examining his family’s history last year. He knew of Jane and the bare facts of her death from his mother, whose own father was her brother.

But it seems that in the climate of fear – and fear of retribution – that attended the War of Independence and the Civil War that followed, the family preferred a low profile.

Jane was 26 years old at the time of her death. She lived with her sister Mary in Lennox Street, Portobello, then a thriving working class and Jewish quarter in Dublin’s south inner city.

She worked in Speidel’s butchers on Talbot Street, and on Friday, November 26th, 1920, she was to marry motor mechanic Daniel in St Kevin’s Church on Harrington Street, not far from her home.

She had bought her wedding dress and going-away outfit.

Jane was buried in Glasnevin Cemetery and that, very largely, was that until last year, when Staveley went to visit her grave.

“I was appalled,” he recalled this week. In the cemetery records, Jane’s body is recorded as being in grave “BG48½”, but there was no headstone, nothing to indicate who lay there or the circumstances of their death – just grass.

“Like six other people shot in Croke Park,” says Staveley, “she didn’t have a headstone. . . Everyone was paranoid at the time, and what happened was my grandfather didn’t want to put up a headstone giving the cause of death because he thought it would have been dangerous for the family.

“So she faded into memory. She wasn’t forgotten, but she wasn’t properly looked after by the family.”

Staveley approached the GAA and the organisation offered to pay two-thirds of the cost of a headstone, the family coming up with the rest. On Saturday, it will be inaugurated in Glasnevin in the presence of about 100 family members from the US, the UK and Ireland, plus the president of the GAA Aogán Ó Fearghail, and friends.

“I think Bloody Sunday – what happened in the morning and then in Croke Park – was the straw that broke the camel’s back of the British government,” says Staveley.

“They realised their own army was out of control and while [British prime minister David] Lloyd George was saying publicly ‘we have terror there by the throat’, he knew they had to negotiate.

“Jane was part of that and I’m proud that we are in an environment now where doing this is not going to raise any anger. I’m terribly sad that it happened and sad about the environment that my grandfather and his siblings had to live through.”

The tragedy for the Boyle family could have been greater. Staveley’s own mother Sheila, 15 at the time of Bloody Sunday, had been due to go to the match with her aunt Jane.

“But her father Thomas, my grandfather, didn’t want her to,” says Staveley, “I think because of the trouble earlier that Sunday morning.”