Everything you need to know about water charges 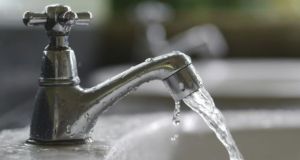 The end is nigh for so called free water supplies?

From Wednesday, water will stop being free.

Free? Hang on, have we not always paid for our water through our taxes?

So we can all look forward to a big tax rebate now that a billion euro of general revenue cash has been freed up?

No. Didn’t think so. Okay then, what’s the damage? Any change from what the Commission for Energy Regulation (CER) announced last August?

Not really - at least not when it comes to the bottom line. Metered rates have been set at €4.88 for 1,000 litres of water - or just under half of one cent per litre - for homes which need both waste and drinking water services. If only one services is needed - if you have a septic tank or private water supply the rate of €2.44 per 1,000 litres applies.

Assessed charges apply to those who do not have meters installed and will be based on the number of people living in a home. It starts at €176 for a one adult home, with an extra €102 added for every additional adult. Children will not be included in assessed charges because they go free. The nearly 1.4 million new customers of Irish Water will pay the assessed charge for the next nine months

Hang on, what if I am on a meter and use less water than the assessed charge?

You will be given a rebate.

How will they know I used less - won’t they have to read my meter today?

No. The meter reading on the last day of every month is automatically recorded and stored for three months so the readers who check your meter at any point between now and Christmas will know what it was set at on day one and make adjustments accordingly.

How much water do we actually use?

I still don’t have a meter, when will I get one?

Around 400,000 houses have metres - slightly more than a quarter of all residential properties. An accelerated metering programme is continuing and they will be installed in about 80 per cent of homes by the middle of 2016.

Metering of apartments in complexes with a shared water supply has proved difficult but the Department of the Environment is exploring the potential to include a new phase of metering of 48,000 individual apartments. The metering is important because multiple studies show 16 per cent less water is used when metered.

Do I still have to pay for water if it is unfit for consumption?

The Commission for Energy Regulation (CER) has confirmed householders whose water supply is undrinkable will get an immediate 50 per cent discount on their water bills. They will still have to pay for waste water facilities regardless of water supply quality. If you have a septic tanks installed and the water is not drinkable you will not have to pay for any service until it improves.

When will my first bill arrive?

I have a medical condition so my usage is to be capped at the assessed rate. What proof do I need of my condition?

None. People will not have to provide evidence of the condition as Irish Water is planning to operate an honour system.

I am renting a house, what do I need to do?

If Irish Water has details of you as a tenant they will already be writing to you and if they don’t know you are renting, then the pack will be addressed to ‘The Occupier’. If a rental property is occupied the tenant is liable and if it is vacant the owner is. Both should advise Irish Water of change of status to the property - the tenant to cease liability, the landlord to take it up. It is important to remember that if you don’t have a PPS number you will not be given an allowance.

What about my holiday home? I am only there three weeks a year?

If you don’t have a metre installed the assessed charge will be €125 a year.

If a leak is identified in a home by Irish Water after a meter is installed, the customer’s charges will be capped at the assessed level until the leak is fixed. Irish Water has previously committed itself to fixing the first leak free to avoid people paying the price for legacy water issues.

What are the chances of the charges increasing?

All we know about the current pricing structure is that it will last until the end of 2016. After that, who knows. Irish Water says it costs just under €600 per household to provide each home with water - the Government is subsidising the rest. So if that subsidy was to be reduced post 2016 then charges would rise. The average annual bill in the UK is €550, while German water charges can run to more than €700.

When will my first bill arrive?

Irish Water says it is precluded in law from disconnecting customers for not paying their water bill. It does, however, allow for the supply to be restricted. It says such restrictions “will only be used as a last resort”.

What if I don’t return my form. How will Irish Water know I exist?

Irish Water will bill you first as ’The Occupier’ and will assume you are a household with two adults which means you pay €278 a year. However, they will also strip you of all the allowances including the allowance of 30,000 litres of free water per household worth €0.48 cent per litre) so your annual bill if you do nothing will be €424.

Can I evade this charge like a TV licence fee by refusing to reveal my identity to Irish Water and by refusing to answer the door if any of its representatives call?

Not for long. Irish Water said they can find out who owns properties using the land register and the owner will be deemed to be the owner occupier and liable to pay the charge. If the property is rented landlords are asked to encourage tenants to register with Irish Water.