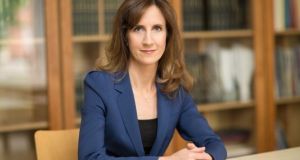 Engineers Ireland’s director general Caroline Spillane: “The statistics in Ireland are stark: if you are in a room with 10 engineers, the likelihood is just one will be female.”

Century old attitudes are precluding Irish women from pursuing careers in engineering, according to the industry’s representative body.

“The statistics in Ireland are stark: if you are in a room with 10 engineers, the likelihood is just one will be female,” Engineers Ireland’s director general Caroline Spillane has said.

Ms Spillane, who marked the naming of an NUI Galway building after Ireland’s first female engineering graduate, Alice Perry, on Monday, has called for action to attract more women into the sector.

A recent report by Eurostat showed that 85 per cent of engineering, manufacturing and construction graduates in Ireland were male in 2014, compared to the EU average of 73 per cent.

An internal survey among Irish engineers working in Ireland, Northern Ireland and Britain which was published on Monday has identified societal barriers as being a major factor.

More than 86 per cent of engineers believed parents and school teachers could do more to encourage more female students to take subjects leading to an engineering career.

More than half of those surveyed believed that outdated attitudes, among both women and men generally, were obstacles.

Over half (54 per cent) of engineers believe strong communication, project management, analytical and design skills are now as important as maths understanding for the modern engineer, the survey found.

The gender imbalance needs to be tackled to ensure specific creativity and innovation skills shown by women are harnessed, Ms Spillane said.

“It is these skills, combined with a formidable intellect and remarkable work ethic, that Alice Perry displayed in abundance across her illustrious engineering career,”she said.

Ms Perry was the first woman in Ireland or Britain to earn a degree in engineering when she graduated from what was then Queen’s College Galway in 1906. She was also the only woman to have served as a county engineer, according to Engineers Ireland.

Engineers Ireland is currently hosting a series of events for Engineers’ Week, details of which are on www.engineersweek.ie.