Two people in intensive care after crash in Ballsbridge at about 10.45pm on Friday

Eight people have been injured, two of them seriously, in a collision between a bus and a car in Dublin on Friday night. Two men – understood to be occupants of the car – are in intensive care. Video: Bryan O'Brien 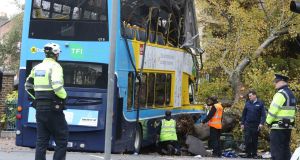 Gardaí at the scene of the crash in which eight people were injured on Friday night. Photograph: Leah Farrell/RollingNews

Eight people have been injured, two of them seriously, in a collision between a bus and a car in Dublin city centre last night.

Two men – understood to be occupants of the bus – are in intensive care.

The Garda Síochána Ombudsman Commission has been informed as “one of the vehicles involved had come to the attention of gardaí prior to the incident,” gardaí said in a statement.

The collision happened on at the junction of Northumberland Road and Haddington Road in Ballsbridge at about 10.45pm.

After the collision the bus crashed into the front garden of a house where it knocked a tree which fell against a house.

It is unclear if the house was damaged.

The bus and car were both still at the scene this morning. The car appeared to have flipped onto its side after the collision.

Emergency services were swiftly on the scene and eight people were taken to hospital. It is understood others were treated for minor injuries at the scene.

The scene of the collision remains closed for a forensic examination and gardaí said diversions were likely to remain in place for much of Saturday.

Gardaí at Irishtown are appealing for witnesses to come forward, particularly anyone who has camera or dash-cam footage.