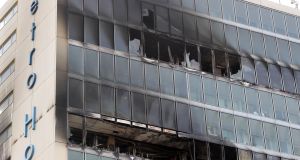 The scene of the at the Metro Hotel, Ballymun on Thursday morning. Photograph: Colin Keegan/Collins Dublin

Dublin’s chief fire officer has insisted the nature of the fire at the Metro Hotel in Ballymun is not comparable to the Grenfell Tower blaze that killed 71 people last year.

Speaking at the scene on Thursday morning Patrick Flemming said the UK incident was related to cladding on the building while this was not an issue in the Irish case.

“One of the messages I would like to get through to people today who may be afraid by having seen a fire like this and they are living in apartments or [are] tenants or own apartments, that this was not a Grenfell Tower type of incident and the second thing is it is very, very important if you are living in an apartment to be fire safety aware,” he said.

The hotel apologised in a statement to hotel patrons and guests saying the hotel would remain closed for some time following the fire.

“All hotel guests (over 150) as well as the residents of 30 apartments attached to the hotel are accounted for and were relocated to the nearby Carlton Hotel for the night,” it said.

"The key focus of hotel staff today is to notify inbound guests and to source alternative accommodation for tenants and guests, with whom we will be liaising throughout today.

"Unfortunately, guest and tenant access to personal belongings located in the hotel / apartments is restricted until clearance is received from emergency services. We will provide regular updates as they become available.”

Dublin Fire Brigade received a call to respond to the incident at 8.13pm with 60 fire fighters and eight engines responding within seven minutes.

No cause of the fire has yet been identified but Mr Flemming said there was nothing to suggest it was suspicious at this stage. Gardaí will take the lead in the investigation, he said.

However, for those who live in the high rise – which is a mixture of private apartments and hotel rooms – repair works are likely to take months.

“I think we are talking much longer than [a period of weeks],” Mr Flemming said.

“The damage that the fire has done, and there is also a lot of water damage to the building as well, and the structural elements of the building will have to be looked at. There is a lot of work to be done to this building now.” 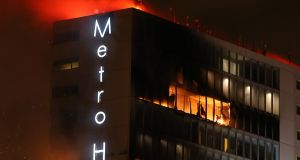 We'll have 4 fire engines on scene at the #BallymunFire overnight to damp down & extinguish hot spots. Road closures are likely to affect traffic in the morning #Dublin #fire #Ballymun @DCCTraffic @aaroadwatch pic.twitter.com/qewyJlUvHV

Apartments on both the thirteenth floor, where the blaze broke out, and the tenth floor were destroyed while in the floors between were badly damaged.

About 150 people were evacuated during the operation. Fire fighters increased water pressure at the site and they also received back up water supplies from the airport fire service.

“There is always a problem fighting a fire like this in a high rise building externally because the wind has a huge impact both on the fire itself but also on our ability to get water on it but it wasn’t an issue for us in this fire,” Mr Flemming said.

He described it as probably one of the biggest fires they have dealt with in a high rise building in recent times.

Local Labour councillor Andrew Montague said the fire appeared to have spread in a downward direction due to falling debris.

“A few people were watching it from the start and they could see it happening,” he said.

“Things were falling down and it (the fire) skipped floors.”

Taoiseach Leo Varadkar offered his sympathies to people affected by the fire.

“I know some people have lost belongings and lost their personal effects. Thankfully nobody was injured or killed,” he told reporters as he arrived at the European Council in Brussels.

Reports received so far showed the evacuation protocols and containment measures within the building ensured the fire did not spread, he said. “So it’s nothing at all like the Grenfell Tower,” he said.

Mr Varadkar said that there would be a Garda and Dublin Fire Brigade investigation into the fire. He thanked the emergency services for all that they did overnight and this morning.

Syed Haider (27) and Hunnain Haider (23), who are both from Pakistan, were evacuated from an apartment on the 8th floor. The students, studying at the College of Computer and Technology, Westmoreland Street, said they heard a knock on the door and it was hotel staff evacuating residents.

They heard the fire alarm go off but thought it was a “check-up”, the brothers said. They believe there were 30 people evacuated.

“We are shocked and worried about our documents, our passports,” the students said. They have been studying and staying at the hotel for two years.

The hotel is organising accommodation at the nearby Crowne Plaza hotel for the night, they said.

Guests at the hotel, Lynn Trautmann and her husband Ted from Chicago, said they had arrived back from dinner in the city and found they could not get access to the building.

“We looked up and saw the hotel was on fire,” Ms Trautmann said.

“They are not shooting water on my floor, so I hope my camera is saved. I’m a photographer and that’s the only thing I’m worried about.”

The couple were in Dublin to visit their son, who is in UCD, and were due to fly home tomorrow.

“We are not sure what will happen now,” they said.

Local resident Stephen O’Leary, who lives across the road from the hotel, said he was returning from the shops and saw families wrapped in blankets and the fire brigade.

“I saw fires before when the towers were here, but I’ve never seen anything like this,” he said.

“I hope everybody got out okay. It seems like everybody was evacuated very fast.”

Taxi driver Patrick Canning said he had just dropped someone to the hotel a few minutes before the fire.

“I was lucky to get out when I did because I was parked where the debris is falling five minutes prior,” he said.