Dublin council to pilot use of street lamps for electric vehicles 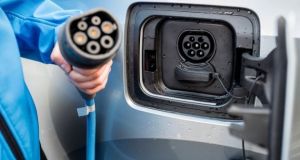 Charging points for electric vehicles on street lamps could address problems posed by terraced houses without front gardens or driveways, where cables would have to stretch across footpaths.

Dun Laoghaire-Rathdown County Council is set to become the first local authority to provide an electric vehicle charging point in a street lamp.

The provision of charging points for electric vehicles on street lamps has been put forward as a solution where homes are not suitable for charging points - such as terraced houses without front gardens or driveways where cables would have to stretch across footpaths.

Difficulties with placing electric charge points have also arisen in relation to some apartment blocks where parking is a distance from electricity supplies.

Pilot projects, particularly in Germany, have seen charge points being established in lamps on the sides of the roads and now Dun Laoghaire-Rathdown is to set one up in a street lamp on Crofton Road, close to the railway station.

The move follows the failure of the current electric vehicles charging point outside the Town Hall, on Marine Road. Under council plans to promote the use of electric vehicles this point is to be replaced in the near future.

The council has also recently taken delivery of six electric-powered Citroen Berlingo vans for its fleet operations. The electric vans will replace existing diesel powered vehicles and will be based in the council parks and landscaping section.

In addition, the council is planning to buy a fleet of up to ten electric cars for its staff later this year.

The council hopes the new electric-powered vehicles will reduce the impact of its fleet on local air quality by reducing nitrogen dioxide associated with diesel vehicles.

The council also said its fuel costs for electric vehicles should be much lower with savings of 90 percent anticipated as well due to lower maintenance costs.

The council said the changes were part of its drive to have as many vehicles as possible switched to electric power in the coming years.

It said it would also be “looking at options for additional installing electric charge points in the public realm and in the car parks that we own”.

Dun Laoghaire Rathdown Councillor Ossian Smyth welcomed the move particularly the introduction of a charge point in a street lamp. He said the use of street lamps had tremendous potential to make electric vehicles more accessible to householders and he congratulated council staff on the initiative.