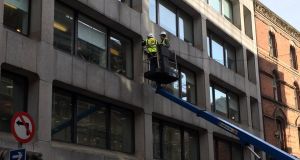 Workers can be seen examining the damaged section of the building on Trinity Street. Photograph: Dan Griffin/The Irish Times 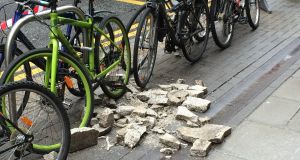 Part of the concrete cladding which fell from a building in Trinity Street in Dublin is seen on the footpath. Photograph: The Irish Times 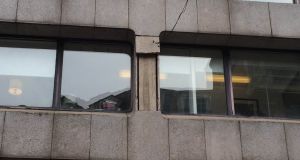 The damaged section of the concrete cladding on a building on Trinity Street in Dublin. Photograph: Dan Griffin/The Irish Times 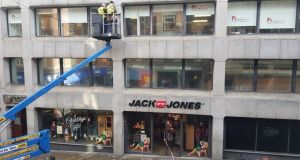 Trinity Street has been closed to traffic. Photograph: Colm O’Regan

Trinity Street in Dublin city centre has been closed to traffic entering from Dame Street after a portion of the facade of a building fell onto the footpath.

A concrete cladding panel fell from the second storey of the building at 6-9 Trinity Street in Dublin city centre on Tuesday morning.

Structural engineers are at the scene to investigate the cause of the damage and the street is to remain closed while an assessment takes place.

A temporary fixing needs to be put in place to prevent any more cladding falling from the building and it is expected the street will remain closed until at least 6pm.

An engineer said it was likely that the panel fell off during the middle of the night. He added that it was “not common” for pieces of facade to fall off buildings which have been constructed relatively recently.

Debris was visible this afternoon on the footpath near bicycle racks outside the Jack and Jones clothing outlet on Trinity Street.

About three quarters of the panel fell off the building. The remaining quarter was still in place this morning but it was removed by workers because it was likely to fall onto the footpath.

An engineer speculated that a bolt which had secured a cable to the panel may have cracked the facade and resulted in the damage.

There are no reports of any injuries.