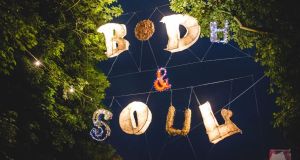 Festival organisers are working with the Garda in relation to the death of a man and have described it as “non-suspicious”. Family members have been notified.

A man has died at the Body & Soul festival in Co Westmeath.

Festival organisers are working with the Garda in relation to the death and have described it as “non-suspicious”. Family members have been notified.

The three-day arts and music festival takes place each year in Ballinlough Castle, Co Westmeath. Its capacity is 15,000.

This is the first time there has been a death at the festival, which has been running for eight years.

In a statement, festival director Avril Stanley said: “There was an incident on the site at Body & Soul Festival today.

“We can confirm that An Garda Síochána at Delvin Garda station are investigating a non-suspicious sudden death.

“The male was taken to the medical tent this afternoon by medical staff and tended to at the time by advanced paramedics and a consultant doctor in emergency medicine.

“His family and friends have been notified. We wish to extend our deepest condolences to them at this time.

“We will continue to work closely with the gardaí on their investigation in this matter. The team at Body & Soul are absolutely devastated by the news today. We have no further information. It is a matter for the gardaí.”

1 Election 2020: 10 key questions to ask candidates on your doorstep
2 Election 2020: Peter Casey to stand in both Donegal and Dublin West
3 Which jobs do teenage girls and boys aspire to have by age 30?
4 Eating out in Dublin – the homeless way
5 Mary Lou McDonald upset by SF councillor’s ‘vile’ comments
Real news has value SUBSCRIBE