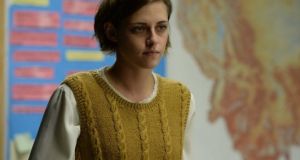 A Belgian comedy thriller set in west Cork is among the films scheduled for this year’s Cork Film Festival which opens Friday night and runs until November 20th .

Broer (Brother), directed by Geoffrey Enthoven, tells the story of Mark (played by Koen De Bouw) who impersonates his deceased brother Michel and travels to Ireland after a message arrives from one of Michel’s old flames, Grace, who is played by Alison Doody and who starred in Indiana Jones and the Last Crusade.

Grace’s husband has died and she wants to revive a 20-year-old affair with Michel but Mark is urged on by his friend Ronnie (Titus de Voogdt) who hopes for a windfall when Mark marries the rich widow.

“We wanted to have a really hapless duo who had to be funny together – those two going to Ireland to get a fortune – it’s impossible! But that’s just one side of the story,” Mr Enthoven told Flanders Today.

And there are works from directors and actors closer to home, including Cork’s Fiona Shaw.

Shaw stars in Out of Innocence, directed by Danny Hiller, a drama that has echoes of the Kerry Babies story from the 1980s. In the film, a link is wrongly made between a stillborn baby and the murder of another baby found 50 miles away.

Also featuring at this year’s festival is the European premier of the psychological thriller I Am Not a Serial Killer, directed by Cork man Billy O’Brien and produced by Nick Ryan.

The film, which was partially funded by the Irish Film Board, has been nominated for three prizes at the 2016 British Independent Film Awards (BIFAs).

The festival’s creative director James Mullighan said some 80 Irish films, including 39 short films, are among the 200 films being screened at venues around the city over the course of the festival.

“Irish film has been flourishing in recent years with a host of outstanding home-grown features, documentaries and shorts,” he said. “ We are very proud to celebrate the accomplishment of the country’s film industry.”

Mr Mullighan instanced the world premiere of Ross Whitaker’s surf documentary Between Land and Sea, which is about a year in the life of Clare surfing town Lahinch.

He also pointed to Crash and Burn, a documentary telling the tale of Drogheda’s Tommy Byrne who, for a fleeting moment in the 1980s, was the world’s greatest Formula 1 racing driver.

1 Donald Trump is in trouble, and that could spell very bad news
2 House parties are being held ‘with abandon’, Holohan warns
3 O’Doherty and Waters ordered to pay legal costs of case against State over Covid-19 laws
4 Harris rules out early opening of hotels amid easing of lockdown
5 Poor levels of diversity in Irish public life, Immigrant Council warns
Real news has value SUBSCRIBE