Celebrities and sports stars tog out for annual hurling fundraiser 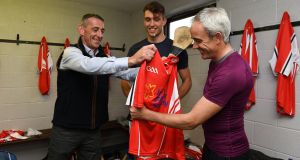 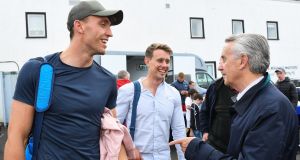 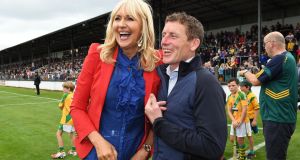 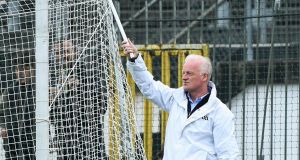 If the whole jockey thing hadn’t worked out for Davy Russell, he might instead have played hurling for his native Cork. That’s the opinion of other people, not his. He claims he always had “more enthusiasm than ability. I was a tight marker, good at tapping lads on the ankle and with a small bit of pace – that’s about it”.

But, either way, since 2012 he has been pulling on the Cork jersey once a year in the annual Hurling for Cancer Research fundraising match, in which his team of inter-county stars and a few celebrities play one selected by trainer Jim Bolger, in the colours Wexford.

For the latest instalment, alas, he was reduced to watching from the sidelines of St Conleth’s Park, Newbridge, Co Kildare. Cork’s red-and-white strip is known in GAA circles as the “blood and bandages” – something jump jockeys know plenty about. And sure enough, Russell had to sit out the 2019 hurling challenge, being “slightly knocked up – nothing serious”.

In his absence, the playing was left to such confirmed hurling masters as Lee Chin, Ollie Canning and Cian Boland, along with former international soccer players Niall Quinn and Stephen Hunt, both of whom have been known to hurl a bit too. Wexford All Star Ursula Jacob was among those representing camogie.

Most of the celebrities, meanwhile, were non-combatants and kept a safe distance from the action. They included broadcaster Miriam O’Callaghan and former RTÉ newsreader Anne Doyle, both running the line for the game. As usual, Micheál Ó Muircheartaigh and Seán Bán Breathnach provided live commentary.

The good cause behind the night’s event also featured briefly during the moment of Russell’s greatest triumph last April. After winning a second consecutive English Grand National on Tiger Roll – the first back-to-back victory in the race since Red Rum – an emotional jockey took time to mention his friend, former All-Ireland winning Cork footballer Kieran O’Connor, who he said was fighting the “battle of his life”.

“This one’s for Kieran,” he announced on camera.

O’Connor’s condition, known as Ewing’s Sarcoma, is a relatively rare form of cancer. But the fact that so many Irish families have been affected by some form of the disease makes events like the annual hurling game an “easy sell”, Russell said.

When the event was first held in 2012, it raised more than twice the target of €50,000, and the total has been in six figures every year since, for an accumulated €840,000 up to and including 2018. A crowd of 6,123 attended the latest fixture, and organisers were “cautiously optimistic” that when all returns are in, the cumulative total will have risen to over a million.

All proceeds go to the Irish Cancer Society.