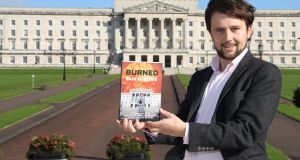 Sam McBride with his book Burned, at Stormont Parliament Buildings in October. The public inquiry is due to report next year. Photograph: Laura Davison/Pacemaker Press

Burned, a book by Sam McBride that charts Northern Ireland’s “cash-for-ash” scandal and the Democratic Unionist Party’s role in it, has become a guilty pleasure for many in the party this Christmas.

In just over eight weeks, the book has sold 25,000 copies, plus more than 4,000 more in ebook format, making it the Dublin-based Merrion Press’s fastest-selling title ever.

Queues have formed in places. “We haven’t seen a response like this since the final Harry Potter book,” was how Emma Southon from Waterstone’s in Belfast put it.

The sales were enough to take it into the UK-wide Top 10, a virtually unheard of feat for an Irish-published book, not least because, on the island of Ireland, only Northern Ireland sales count towards the UK bestseller list.

“I don’t think I’ve ever seen an Irish-published title even make it into the UK Top 10 before,” says McBride’s publisher, Conor Graham of Merrion Press. “It’s been an extraordinary publishing success.”

Speaking shortly after its launch, a DUP member said: “We will all bring brown paper bags to put it in and tell the media that we are buying it for a friend. We certainly won’t be telling Arlene Foster. ”

Shocking work...raises profound and troubling questions about the future of government in Northern Ireland

In the eyes of one reviewer, Susan McKay, it “inevitably has to dwell on boilers, sheds and civil servants”, but remains, nevertheless, “an absolute page-turner”.

It was, she wrote in a review for The Irish Times, a “shocking work” which “raises profound and troubling questions about the future of government in Northern Ireland”.

Nobody (least of all McBride, the political editor of the Belfast News Letter) foresaw how well Burned would sell.

Northern Ireland is a small place, its cast of politicians well-known. In places, it reads like a soap opera, one in which a former minister, the DUP’s Jonathan Bell, is seen in one chapter haggling over the size of a free turkey.

Elsewhere, it tells of the night he was involved in the saying of prayers before appearing on a local Belfast TV station where he made allegations that inflamed a bitter row in a crisis that brought down Stormont.

The North’s former first minister, the DUP leader Arlene Foster, features on the cover; she has said she has not read it, although McBride says it is clear the book is being read within the party.

“One DUP MLA told me he hadn’t bought it and wasn’t going to, so he could answer people honestly when he was asked if he had bought it, but he wanted to read it and so was trying to find a way to square that circle with himself.”

'Oh I haven’t read it and I’m not going to read it’, but they’ll have got their lawyers to read it

The story of the RHI scandal is not one to stay confined to the bookshelves, however. The public inquiry is due to report next year. Careers depend on how it reads.

Despite threats of legal action from Ms Foster and four other senior DUP figures, none has so far arrived, though other politicians, special advisers and civil servants have privately dubbed it “ very fair”.

“Some [in the DUP] boast, ‘oh I haven’t read it and I’m not going to read it’, but they’ll have got their lawyers to read it, and there hasn’t been a complaint about a comma,” he adds.