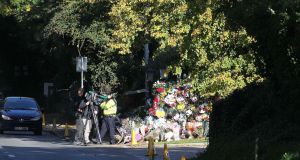 Flowers on Glenamuck Road in Carrickmines, Co Dublin, near the site of a fatal fire at a halting site. Photograph: Stephen Collins/Collins Photos

Efforts continued on Monday to identify the remains of the 10 people who died in a fire at a halting site in Carrickmines in Dublin.

Two children are also still being treated in hospital for their injuries.

The two - both boys - were orphaned by the fire at the south Dublin site early on Saturday.

The Southside Travellers Action Group (Stag), which has been assisting the bereaved families and coordinating the response to the tragedy, said in a statement that the forensic identification of the deceased was ongoing and that the family members were assisting in that difficult process.

It said that Dún Laoghaire-Rathdown County Council was working to find appropriate accommodation for those left homeless by the fire .

Amid fears of overcrowding and poor conditions on other halting sites, fire prevention authorities across the country will now be asked to begin risk-management programmes in those communities seen as most at risk.

Officials from the Department of the Environment met representatives of Stag on Monday to discuss fire safety issues.

The organisation told representatives that travellers living on sites in south Dublin and across the country have been worried about fire safety since Saturday morning’s tragedy.

It said that it has established a steering group to oversee the local response to the immediate needs of the bereaved families in Carrickmines.

Agencies and government departments who were represented at the meeting at the Sandyford offices of the group on Monday included the Department of the Environment, the HSE, Dún Laoghaire-Rathdown County Council, the Department of Social Protection, the Traveller Counselling Service, St Vincent de Paul, the Parish of the Travelling People, An Garda Síochána and Southside Partnership

Stag confirmed that those who died were Thomas Connors (27), his wife Sylvia (25), and their children Jim (5), Christy (2), and five-month-old baby Mary; Sylvia’s brother Willie Lynch and his partner Tara Gilbert and their children Kelsey (4) and Jodie (9).

The Lynch family lived in Fassaroe in Bray, Co Wicklow.

The HSE and the Traveller Counselling Service are drawing up a plan to provide counselling services for adults and children following the tragedy.

Stag said that this service will be available to the bereaved, to the staff of Southside Travellers and the wider Traveller community, all of whom have been deeply affected by the deaths.

The Irish Traveller Movement said it will join with Stag to represent the wide network of Travellers who wish to pay their respects to those who lost their lives in the blaze, as well as to the injured and their extended families.

“There has been an overwhelming response by all communities who are eager to mark the tragedy through support, emotional and financial, and through human solidarity for those affected and their lost loved ones.”

Director of Southside Travellers, Geraldine Dunne, thanked all those locally and nationally for their “outpouring of support”.

She said that An Garda Síochána in particular had provided “extraordinary support” to the Traveller community in the past few days.

Ms Dunne also expressed her condolences to the family of Garda Tony Golden, who was shot dead in Co Louth on Sunday.

A Garda spokesman confirmed technical experts were continuing to examine the fire scene at Carrickmines on Monday.

A bank account has been established by the local branch of St Vincent de Paul to assist the families affected by the fire.