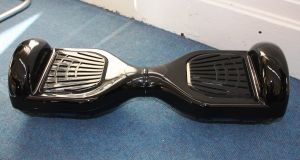 Hoverboards don’t actually hover. Instead, they are made up of a small platform with wheels on each side - somewhat like a Segway minus the handle. File photograph: Kent County Council Trading Standards/PA Wire

It sounds like a line taken directly from Back to the Future.

A large consignment of hoverboards have been blocked from entering Dublin Port over fears they might burst into flames.

The Competition and Consumer Protection Commission (CCPC) suspended the importation of about 1,400 Smart Balance Wheels - also known as Hoverboards - over safety concerns it identified through “market surveillance activity”.

Disappointingly, Hoverboards don’t actually hover. Instead, they are made up of a small platform with wheels on each side - somewhat like a Segway minus the handle.

They have become increasingly popular in recent months with a host of minor celebrities photographed boarding the devices.

While they might be popular in some quarters, the items - which can retail for in excess of €500 -have not gone down well with authorities either here or in other jurisdictions.

Last month, the Crown Prosecution Service in the UK said they could not be used on public footpaths or roads because of associated dangers, and could only be used legally on private property.

At the end of October, the CCPC became aware of reports of unsafe Hoverboards across Europe, and initiated an investigation. Customs authorities then alerted it to the arrival of a large consignment, and the commission’s product safety division examined a sample.

The safety people identified serious safety concerns and the importation was suspended. The goods will have to be returned to the country of origin, and the commission is engaging with businesses who supply similar products or who are planning to place them on sale.

“Following the examination, the commission was concerned that consumers may be at risk should the AC adapter charger or the battery pack overheat and potentially cause a fire,” chairwoman of the CCPC Isolde Goggin said.

“Our investigation is ongoing, but at this point we are aware that similar products are on sale here and we are investigating to determine whether these products meet the relevant Irish and EU safety standards.”

She urged consumers who are in the market for a hoverboard to make sure the manufacturer’s name or trademark was visible on the packaging and that it had a genuine CE mark.

“We would also remind businesses that by law they are required to ensure that the products they sell conform to EU and Irish standards,” Ms Goggin said.

“Retailers and wholesalers should source products from reputable manufacturers and importers. They should also ensure that all the goods are certified as meeting both Irish and EU safety standards.

“If this isn’t the case, the commission will take appropriate action to ensure compliance.”

1 Coronavirus: Tenerife hotel in quarantine after tourist tests positive
2 Woman in her 30s arrested after man fatally stabbed in Co Dublin
3 Irish health officials to ramp up precautions against coronavirus
4 Graduates 'not well-equipped' for future workplace
5 McDonald says SF meetings not ‘an affront to democracy’
Real news has value SUBSCRIBE