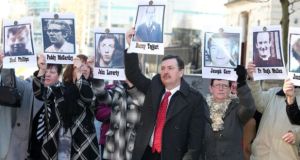 Supporters pictured in 2014 of the victims of the Ballymurphy shooting. Photograph: PA

A bullet has been removed from the exhumed body of one of the 11 victims of the so-called Ballymurphy Massacre in west Belfast in 1971, the families have said.

Earlier this year an order was granted by Belfast coroner Jim Kitson for the exhumation of the body of Joseph Murphy who on his deathbed told his family that he was shot while in the custody of the British army.

John Teggart of the Ballymurphy families, which have been campaigning for an independent inquiry into the killings, said the discovery of the bullet proved their claim that some of the victims were shot while in British army custody.

“This proves what we have been saying for years that after being shot outside the British army barracks Joseph Murphy was brutalised and shot again inside the barracks,” said Mr Teggart.

The shootings happened during Operation Demetrius, the introduction of internment without trial in August 1971. Inquests have yet to be concluded into how ten people including a priest who had gone to the aid of one of victims and a 50-year-old mother of eight children were shot dead by British soldiers.

An eleventh victim, who does not come under the terms of the inquest, Paddy McCarthy, died from a heart attack after a soldier allegedly put an empty gun into his mouth and pulled the trigger.

It is believed that most if not all of the killings were carried out by members of the British Parachute Regiment just months before the same regiment was involved in the Bloody Sunday killings which resulted in the deaths of 14 innocent civilians.

The Murphy family for years had contended that Joseph Murphy was not only shot in west Belfast by British soldiers but that when he was taken into custody in the Henry Taggart barracks he was shot again.

John Teggart, spokesman for the families, explained how Mr Murphy survived for 13 days after the shooting, but that before he died he told his family he was shot by one of the British soldiers inside the barracks.

Mr Teggart said that during a post mortem at the time a bullet was removed from Mr Murphy’s body. He said the exhumation and second post mortem had found the second bullet which, he believed, proved the truth behind Mr Murphy’s allegation of being shot a second time.

“This further reinforces our demand for an independent panel to be set up to investigate the killings. It proves what the families have said all along, that there was not a proper investigation of the killings,” added Mr Teggart.

Taoiseach Enda Kenny, Sinn Féin, the SDLP, the Alliance Party and the British Labour Party have supported the Ballymurphy families’ calls for an inquiry.