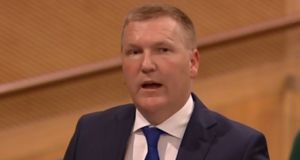 The Government is to put in place hundreds of new hospital beds, millions of additional home support hours and up to 16,000 extra staff on foot of the largest health budget in the history of the State.

The Government has signalled there will be major investment in cancer, maternity and trauma services as well as in the disability and mental health sectors while it is aiming to reduce waiting lists by funding an additional 100,000 in-patient and day case procedures.

The Minister for Public Expenditure Michael McGrath said an additional €4 billion over the original allocation for 2020 will be earmarked for the health service next year.

This money will be used to pay for both the continuing cost of Covid-19 measures, including a €650 million allocation for testing and tracing systems and a further €650 million for the purchase of personal protective equipment, as well as €1.3 billion for various new initiatives to boost capacity and improve services.

Overall the health budget will rise to €21 billion next year with a further €1 billion in additional capital spending.

On foot of the new funding the Department of Health and Health Service Executive are to put in place 1,146 additional acute hospital beds.

The number of intensive care beds available for adults will increase to 321 by the end of next year, a rise of 66 over the funded 2020 levels.

There are also to be 1,250 community beds provided next year including 600 new rehabilitation beds.

Mr McGrath said five million additional homecare hours would be funded next year “following on from the 19 million provided in 2020”. He said this would help alleviate community waiting lists for home care, support hospital avoidance and delayed discharges.

The Minister also signalled that the additional health funding next year will facilitate the appointment of the first tranche of additional hospital consultants who would treat only public patients in public hospitals under the Sláintecare reform plans.

The previous government last December promised that 1,000 such public-only consultants would be appointed over a decade.

About €147 million to be provided to facilitate what the Government described as the “accelerated implementation” of a number of national healthcare strategies in areas such as cancer, maternity and trauma services.

The Government is also to support the roll out of other social care strategies.

Mr McGrath said €5 million would be allocated to the development of community-based dementia services and supports.

He said funding would also be earmarked for cancer screening “to create greater resilience in the cancer services pathway”.

Mr McGrath said the increased health budget would “support immediate actions to address waiting lists with approximately 100,000 additional inpatient and day care procedures through investment in public hospitals and utilisation of spare capacity in private hospitals and via the National Treatment Purchase Fund”.

There is also to be additional investment in mental health services with €38 million to be earmarked for the implementation of the “ Sharing the Vision,” national mental health strategy.

Mr McGrath also said that €100 million would be allocated for new disability measures to be introduced next year.

The major investment in health spending in the budget has been broadly welcomed by groups representing doctors and nurses.

The Irish Nurses and Midwives Organisation (INMO) said the €4 billion in additional spending on the health service was much needed, but needed to be spent well.

It said it welcomed the new on spending on the national maternity strategy, the safe staffing framework in nursing, the start of the transition to a single-tier health service, as set out in the Sláintecare plan, additional funding for disability and hospice services, and increased public care of the elderly in home and residential care settings.

The Irish Medical Organsiation said the budget had begun to address the shortfall in beds and the move of care to the community.

“ However, it must be accompanied by a guaranteed, multi-annual investment to increase bed numbers by at least 5000 over a relatively short period of time while at the same time increasing resources in the community to allow GPs to deliver appropriate well resourced care locally.”

The Irish Hospital Consultants’ Association said: “We welcome much of what is contained in Budget 2021. The importance of the healthcare system to our society and economy has never been clearer. While we are playing catch-up, investment of an additional €4 billion in healthcare deserves to be recognised and provides much needed backing at a crucial time.”