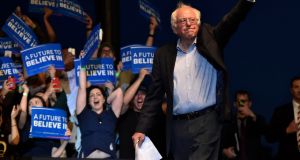 Fine Gael MEP Deirdre Clune has rejected claims by US presidential candidate Bernie Sanders that planned air routes between Cork/Shannon and the US would cause thousands of job losses.

Mr Sanders had said Norwegian Airlines International (NAI)’s planned services would employ low-paid crew, a move that would “threaten the jobs of hundreds of thousands of flight attendants, mechanics, pilots and other airline workers in our country [the US] and in Europe.

“We must do everything we can to prevent a global race to the bottom in the airline industry,” Mr Sanders said.

“If this permit is approved, it would open the door to the same ‘flag of convenience’ model that decimated US shipping.”

Ms Clune said Mr Sanders, unions and a “a number of legacy airline carriers” were attempting to block new competition on transatlantic routes.

“I utterly refute the allegations that Norwegian Airlines is using Ireland as a flag of convenience to employ low-paid crew and to undermine working conditions for cabin crew working for other transatlantic airlines,” she said.

Ms Clune said the NAI’s licence from the US government to fly between Cork/Shannon and the US would have “an enormously positive impact on southern Ireland”.

She said the routes would bring “more tourists, open up more investment and create a direct link between south Ireland and the US”.

Ms Clune also compared the Democratic presidential candidate’s opposition to the air service to the negativity and opposition faced by Ryanair when it sought out a licence to fly to the UK in 1986.

“Look at the impact that Ryanair have had on the EU aviation market, employing some 10,000 people and opening up air travel to millions to Europeans.”

“We cannot continue to protect certain airlines from competition. Doing so will ensure that we continue to see higher air fares on transatlantic routes with less choice and less competition.”