Norman and Pederlita Ferandez Potot speak about the moment the van involved in the Las Ramblas Barcelona attack, hit Norman and their children. 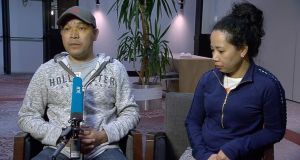 Norman Fernandez Potot and his wife Pederlita, from Dublin, were shopping for souvenirs on Las Ramblas in Barcelona with their two children when the van terror attack was perpetrated. Photograph: RTÉ

An Irish-Filipino family caught up in last week’s Barcelona terrorist attack have said their children are “traumatised” by the events.

Norman Fernandez Potot and his wife Pederlita, from Dublin, were shopping for souvenirs on Las Ramblas with their two children when Mr Potot was sideswiped by the van which killed 13 people and injured more than 100 last Thursday.

He suffered a head injury and a haemorrhage to his kidney, while his five-year-old son Nathaniel suffered a broken leg in the ensuing stampede. His daughter Nailah (9) suffered a fractured arm, while his wife escaped with minor injuries.

The couple, who have returned to Dublin, said “we’re glad we’re home” describing the events as “a really horrible experience”.

“When I looked up my side, I saw the van coming very fast towards us, ramming all the people. Just a couple of seconds...then it hit my side...I passed out and that’s the last thing I remember,” Mr Potot told RTÉ News.

Mr Potot regained consciousness moments later to find his wife looking after their children while wiping his bloody head.

“While she’s wiping my poor head, I told her, ‘My love, hopefully this is only a dream’ and she replied, ‘No, my love, it is real’. That’s what I remember, that’s all,” he said.

His wife said: “I saw my daughter first and then my son, and then him [her husband], so I went to him first because I saw him, that he was unconscious.

“So I tried to wake him up. By the time he woke up, I went to my kids. That’s the time that the police told us to run away from that place, hide somewhere... I was scared when I saw him with a bloody face. I thought he was dead.”

Once Mr Potot regained consciousness, he and his family were taken to a restaurant basement for safety.

Ms Potot said she is “trying to be OK for my kids” who will start to “shout and cry” if they hear a small noise. “They’re really traumatised with it,” Mr Potot said.

“I’m still coping, but still traumatised. I’m still in pain. I don’t know what happened us but we’re trying to cope with everything,” he added. “We’re glad that we’re home, that’s all I can say. I’m very safe here.”

Mr Potot also thanked everyone who had provided support to the family over the last week.

“I would like to thank everyone for their continual support and prayers. Please continue to pray for us and the other victims. Thank you to everyone and to the people around the world who prayed for us.”