As part of Culture Night and Galway 2020 eight volunteers were locked inside a 20 foot container in Galway city centre with only water to drink and a bucket for waste, simulating the conditions experienced by forced migration. Video: Joe O'Shaughnessy 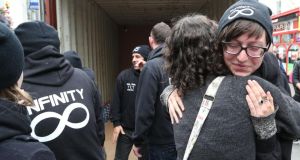 When artists Yvonne Casburn and Derval Leahy released eight people from voluntary 24-hour incarceration in a shipping container in Galway city centre at the weekend, there was a momentary silence before the street erupted with applause.

Blinking in the daylight, the eight participants were clearly moved beyond words as they emerged to hugs and handshakes, cold juice and hot coffee.

“Absolutely humbled” was how sculptor Philippa Maguire of the Giddy Biddy Collective described the experience , which aimed to highlight issues around forced migration into Europe.

She and her seven companions had spent Culture Night in darkness, cold and cramped conditions, with just two litres of water each, a blanket and a portable toilet.

“We had space, but it makes you think what it must be like for people crammed in with standing room only,”she said.

“We all knew that container was going to open at 12 o’clock the next day, we all knew we were going to have a cup of coffee, and I knew my children were safe,”fellow participant John Langan of the Galway-Mayo Institute of Technology (GMIT) observed.

However, people forced to travel illegally in containers into Europe had “none of that certainty”, he said.

“So we got a sense of what it might be like, but nothing of the full real horror,”Ms Maguire said.

“You can only imagine what it’s like to be covered in your own excrement, with little or no air, and your children suffering with you,”she and Langan concurred.

While thousands of people have lost their lives in sea crossings to Europe, hundreds have suffocated in trucks and containers - most recently, 71 people, including a baby girl and three young boys, in Austria in late August.

Last year, Ms Maguire, who is studying at GMIT, created a memorial to eight Turkish people - four of them children - who were found dead in a container in Co Wexford in December, 2001.

This in turn inspired the container installation, known as “Infinity”, which was supported by the Galway 2020 European Capital of Culture bid and GMIT. The container was delivered free of charge to Mainguard Street by Gearoid Forde of Sonny Forde and Sons.

Among the well-wishers on Saturday morning were Syrian couple Suad Darra and Housam Ziad, currently working as research assistants at NUIG .

Mr Ziad’s father was killed by a sniper bullet while trying to assist people during the prolonged siege of Damascus by government forces.

“Irish people are very welcoming , but you can see that there are people in Europe who don’t understand that migration is not an optional choice,”the couple said.

“Nobody wants to be forced to leave their country,”they said.

Zimbabwean-Irish producer Trav Nines of Mic-a-Blaze Records had gathered a number of musicians, including several residents of direct provision, to perform for the eight volunteers when they emerged.

One number was composed overnight specially for the occasion.

“Some of us are refugees, some of us know a bit about travelling in these containers, so that’s why we are very glad to be here,”the music producer said.