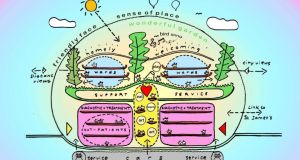 1993: A single tertiary paediatric hospital based in Dublin is proposed by the faculty of paediatrics at the Royal College of Physicians of Ireland. It recommended the hospital be built on an adult hospital site.

2001: A government publication called “Quality and Fairness: A Health system for you” is published, promising a national review of paediatric services.

2005: Then minister for health Mary Harney initiates a review of tertiary paediatric hospital services in September.

2005: A month later, then HSE chief executive Prof Brendan Drumm addresses the Oireachtas Joint Committee on Health and Children. “While I cannot make a determination in advance of a detailed planning process, the centre (National Paediatric Hospital) should ideally be in the city centre or close to the Mater site,” he said.

2005: The HSE commissioned the “Children’s Health First” (McKinsey report) in December. The Terms of reference specifies “its recommendations will be used to inform HSE future decisions on paediatric care”.

2006: A HSE taskforce picks the Mater campus as the site in June and it is endorsed by government. There are many objections for interest groups to the site.

2007: Then minister for health Mary Harney establishes the in National Paediatric Hospital Development Board for the development of the hospital.

2009: Then taoiseach Brian Cowen announces the hospital will be open by late 2014.

2010: NPHDB board chair Philip Lynch resigns in October. Ms Harney said it was not in the remit to the board to ” revisit the Government decision taken on the location of the new hospital”.

2011: The second chairman of NPHDB John Gallagher resigns in March. He said he was “risk of incurring further material ongoing costs in the project without full government support”.

2011: Then minister for health James Reilly announces an independent team to review site decision in May. It reports the correct site was chosen. A planning application is submitted.

2012: An Bord Pleanála defers a decision in relation to the hospital because of the complexity of the case in January. A month later it refuses planning permission. The board said proposed development would “constitute overdevelopment”

2012: In the wake of the decision, Mr Reilly establishes review group (Dophin Group). The Dolphin report is presented to the minister in June. Mr Reilly announces St James’s Hospital in Dublin 8 as the new site in November.

2013: The site is criticised for some quarters as too small a site with poor car access. The project was promised for 2016.

2014: The project brief for the new hospital has been approved by the HSE but the planning application experiences delays. The Dáil Public Accounts Committee heard about €35 million in State funding, which was spent on the development of the original hospital, had been written off.

2015: Minister for Health Leo Varadkar announces a planning application for the €650 million development is being lodged on Monday, August 10th. If the application is successful building work would begin next year with the facility fully operational by 2020.