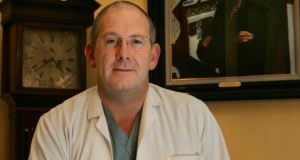 Dr Sam Coulter Smith: “For a baby delivered at 23 weeks to survive is a huge achievement from everyone’s point of view. For a 23-week twin to survive is even bigger because twins often behave more prematurely than singleton babies.” Photograph: Cyril Byrne

The safe birth of twin girls 87 days apart is “truly extraordinary” and “a genuine good news story”, the master of Dublin’s Rotunda Hospital has said.

Dr Sam Coulter Smith said the safe arrival of Amy and Katie Jones-Elliot at Waterford Regional Hospital was a real achievement. Amy was delivered prematurely at 23 weeks on June 1st last year, but Katie did not arrive until August 27th.

“For a baby delivered at 23 weeks to survive is a huge achievement from everyone’s point of view. For a 23-week twin to survive is even bigger because twins often behave more prematurely than singleton babies. That really is right at the absolute border of viability,” Dr Coulter Smith said.


Ideal situation
Twins are usually delivered within minutes or many an hour apart, he said. “When twins deliver close to term, which is the ideal situation, you would want them to be born within a very short interval of each other because the risk starts to go up.”

Referring to the twins born at the Waterford hospital, he said: “This was a very different situation where twin one was very premature and you would prefer to hold on to the second twin if you could. It would be very unusual to be able to do that.”

Treatment in cases where there was a delay in the delivery of twins varies, he said. “Quite often you would have infection associated with a very premature delivery. If infection is what caused premature labour in the first place, then you would want to expedite delivery of the second one because obviously you don’t want a pregnancy continuing in an infected environment.

“If there’s no infection then it is reasonable to … wait until you see what happens but monitoring at the same time.”

The births of Amy and Katie was very unusual, he said, for both mother and those treating her. “You would need to be very cognisant of the risks, be discussing the risks with the parents and then coming to a mutual conclusion based on the set of circumstances you are dealing with.”


Hour by hour
Commending the doctors dealing with the case he added: “People wouldn’t have experience of that type of situation. People treating her would have been taking the situation on an hour by hour basis and then ultimately day by day after that.”

Delayed births of twins are not unknown, said Dr Coulter Smith. Referring to the experience of the Rotunda, where more than 9,000 babies are born annually, he said: “We would have had twins whose delivery would have been separated by a number of days and in some cases a number of weeks – but never that. Eighty-seven days? That’s nearly three months. It is very rare.”

The twins’ staggered arrival is set to become a Guinness World Record as the longest interval between the birth of twins. They were born to Marie Jones-Elliott and her husband, Chris, from Glenmore, Co Kilkenny, who have two older children.