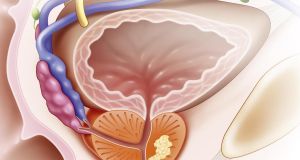 A landmark genetic study described as the “Rosetta stone” of prostate cancer has opened up a new era of hope for men with advanced forms of the disease.

The findings could lead to a plethora of personalised medicines that target specific gene defects, some of which are already in use or undergoing trials.

It sets the stage for a whole new world of treatment options for patients with “metastatic” cancer spreading to their bones and vital organs who no longer respond to existing therapies.

British and US scientists who drew up the first comprehensive map of genetic mutations linked to different strains of deadly prostate cancer found that almost 90 per cent of the men whose DNA they studied carried potentially treatable defects.

They also learned that 8 per cent of the men were born with genetic faults that predisposed them to prostate cancer, strengthening the case for screening people with a family history of the disease.

Professor Johann de Bono, from the Institute of Cancer Research in London, who led the British team, said: “This map will guide our future treatment and trials for this group of different lethal diseases. We’re describing this study as prostate cancer’s Rosetta stone — because of the ability it gives us to decode the complexity of the disease, and to translate the results into personalised treatment plans for patients.

“Our study shines new light on the genetic complexity of prostate cancer as it develops and spreads, revealing it to be not a single disease, but many diseases each driven by their own set of mutations. What’s hugely encouraging is that many of the key mutations we have identified are ones targeted by existing cancer drugs — meaning that we could be entering a new era of personalised cancer treatment.”

Dr Iain Frame, director of research at the charity Prostate Cancer UK, described the research published in the journal Cell as “incredibly exciting and ground breaking”.

He added: “It suggests for the first time the list of genetic mutations to search for in order to build up a blueprint of a man’s prostate cancer once it has spread. This could provide the information about the best routes of attack in each individual case, which is crucial if we are to reduce the number of men dying needlessly from this disease.

“What’s more is that many of the genetic changes they have identified could potentially be targeted by existing drugs. The next step is to confirm whether those drugs would have the same impact if used to target those mutations when found in prostate cancer.

“If so, this could greatly increase the range of treatments for advanced prostate cancer, and crucially enable clinicians to select those which are going to work best for each man with greater confidence.”

The scientists harvested an unprecedented collection of samples of tumours that had spread to the bones, soft tissues, lymph nodes and livers of 150 patients with advanced prostate cancer.

All the men had metastatic castration-resistant disease, meaning that their tumours were spreading and no longer responding to standard hormone therapies.

For such patients the outlook is bleak and average survival no more than 19 months.

Nearly two thirds of the study participants were found to have abnormalities in genes for the androgen receptor, the cell molecule that allows prostate cancer to be stimulated by male hormones such as testosterone.

This was not surprising since one of the hallmarks of castration-resistant prostate cancer is that it no longer responds to treatments that prevent hormones driving tumour growth. However, the finding potentially opens up new avenues for hormone therapy development.

Nearly a fifth of patients had mutations in the BRCA1 and BRCA2 genes best known for their roles in breast and ovarian cancer. Recent research suggests that these men could be treated effectively with drugs known as PARP inhibitors.

Other genetic faults were uncovered that have not been detected before in men with prostate cancer but which are known to occur in other cancers.

They include mutations in the PI3K and RAF gene families that can be targeted by existing drugs either approved for use in clinics or currently undergoing trials.

These tend to carry fewer mutations than cancer that has spread. The few studies carried out on metastatic cancer have tended to rely on post-mortem samples because spreading tumours are often in hidden parts of the body and hard to access.

For the new research, doctors took needle biopsies from patients during the course of their treatment.

Each year around 3,300 men in Ireland are diagnosed with prostate cancer which makes up about 31.5 per cent of all cases of invasive cancer. The National Cancer Registry in Ireland records an average of 519 deaths from the disease each year.

Professor Paul Workman, chief executive of Britain’s Institute of Cancer Research, said: “Cancer becomes lethal at the stage when it spreads round the body and stops responding to treatment — but until now it has been incredibly difficult to find out exactly what is going on genetically at that critical point.

“This major new study opens up the black box of metastatic cancer, and has found inside a wealth of genetic information that I believe will change the way we think about and treat advanced disease.

“The study found that almost 90% of metastatic tumours had actionable mutations, which means that these findings could make a real difference to large numbers of patients.”

US author Dr Philip Kantoff, head of Solid Tumor Oncology at the Dana-Farber Cancer Institute, said: “This is a landmark paper in several respects. It represents a model of collaboration between cancer centres, represents a monumental operational, technical and computational achievement, and finally represents the value of precision medicine in finding actionable mutations.”