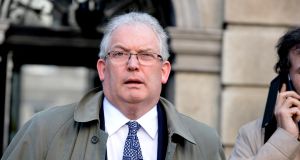 HSE chief Tony O’Brien has told the Public Accounts Committee in a written statement in advance of a scheduled appearance before it on Thursday that the HSE, which has about 100,000 staff, has an average annual tax bill of €1.6 billion. File photograph: Cyril Byrne/The Irish Times

The Health Service Executive has made a €22.4 million settlement with the Revenue Commissioners in relation to unpaid tax.

It is also expected to tell the Dáil Public Accounts Committee on Thursday it may have to make a further similar settlement with the Revenue.

The HSE has argued the €22 million tax settlement reached in August has not impacted on services for patients.

A spokesman for the HSE said the health authority had voluntarily disclosed the tax issue to the Revenue following an internal review.

He said the issue related to whether people who had carried out work for the HSE had been contractors or direct employees.

Some of the money related to tax that would have been owed by the health authority itself, while some related to liabilities of others.

The head of the HSE, Tony O’Brien, has told the committee in a written statement in advance of a scheduled appearance before it on Thursday that the organisation, which has about 100,000 staff, has an average annual tax bill of €1.6 billion.

“As part of its commitment to continued improvements in internal controls and compliance, the HSE performed a detailed internal review of its tax heads for the years 2011, 2012 and 2013 in order to identify areas of risk in tax compliance.

“The HSE worked within the Revenue’s co-operative compliance programme to submit a formal unprompted qualifying disclosure of all identified underpayment of taxes.

“As a result of this process, the HSE and Revenue Commissioners agreed a full and final payment of underpaid taxes including penalties and interest of €22.4 million which was formally accepted by Revenue in August 2015.”

In his written statement to the committee, Mr O’Brien said that payment to Revenue represented less than 0.05 per cent of the overall budget of the HSE for the years 2011, 2012 and 2013.

“More importantly, this payment has not impacted on the delivery of services.

“As a result of this tax review, the HSE has set up a tax department which is currently being resourced and developed.

“Further, the HSE is currently in the process of finalising its internal tax review of 2014 which it has formally agreed with Revenue. It is expected that this review will conclude in November 2015,” he said.