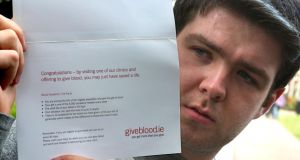 Tomas Heneghan shows a congratulation card which he received for a blood donation. Photograph: Joe O’Shaughnessy.

A young gay man says he has been the victim of discrimination by the Irish Blood Transfusion Service, after he was asked to attend a meeting to answer questions about his sexual life and was then told to stop donating blood until he had received written confirmation he could continue.

In July he received a letter from a doctor at the IBTS, asking him to contact her as she had “a query regarding [his] previous donations”.

Heneghan says the letter alarmed him and he was worried about his health. When he contacted the doctor, he says he asked her to clarify the situation. “She said she couldn’t over the phone and asked me to come to Dublin to discuss the issue.”

Mr Heneghan says he met the doctor at the National Blood Centre in St James’s Hospital on July 25th, where she told him the service had received an “anonymous query” about him.

“She explained to me the necessity of ensuring recipients of blood donations were always kept safe and that numerous different categories of people were excluded from donating blood. I said I understood that.

The doctor asked him if he had ever had sex with another man and he told her he hadn’t. “The meeting felt like an interrogation,” Mr Heneghan told The Irish Times.

The doctor said she believed him but told him he could not donate blood again until the service wrote to him confirming he was permitted to. “I still haven’t received the letter. That was four weeks ago.”

Asked how he feels about the experience, he says: “Of course it’s discrimination. It’s a slap in the face. I have been so loyal and have planned my life around donating blood. It’s very important to me. I keep myself healthy coming up to donations, eat well.

“The staff in the donor clinics have always been friendly. I have no problem with them. It’s the management. This would not happen if I was straight. I am hurt and I am angry.” A spokeswoman said the service could not comment on individual cases “for confidentiality reasons”.