Anti-smoking campaigner Gerry Collins died yesterday morning, surrounded by family yesterday morning. The 57-year-old from Greystones was the face of a national Health Service Executive (HSE) campaign to encourage people to give up smoking in 2011. 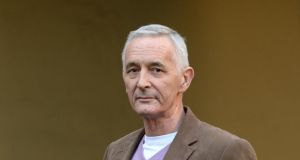 The 57-year-old from Greystones, Co Wicklow was the face of a national Health Service Executive (HSE) campaign to encourage people to give up smoking in 2011 and since January this year.

The father of three overcame throat cancer in 2008 but in June last year he was diagnosed with lung cancer.

Mr Collins was told by doctors that the lung cancer was terminal and he had less than a year to live.

He featured on a number of hard-hitting TV, radio and online advertisements aimed at urging people not to start smoking and encouraging smokers to quit.

In the HSE’s Quit campaign he portrayed the real life struggles of a man whose health had been destroyed by tobacco and the challenges he and his family face following his diagnosis.

“I wish I had stopped smoking earlier, I really do. My life would have been totally different,” he said in the advert.

His daughter Lisa paid tribute to her father on Facebook and said he died peacefully in his sleep surrounded by his family. “We love you dearly xxxx,”she wrote.

The Collins family said they were “incredibly proud” of all Mr Collins did to help others.

“Gerry was a great father, grandfather, husband, son, brother and friend, and we are lost without him,” they said.

“He was touched and delighted by the responses he received, online, by post and in person, from smokers and non-smokers alike, and loved hearing the many stories of people who had quit after seeing his ads or hearing his interviews.”

“He wanted to make a difference, and we know that he did.”

“The response to Gerry’s bravery in sharing his story, of a diagnosis of terminal lung cancer as a result of smoking, through the QUIT campaign has been simply extraordinary,” he said.

“We estimate that over 60,000 people in Ireland have made a quit attempt this year, thanks to Gerry; something his family and friends can be deeply proud of.”

National director of health and wellbeing Stephanie O’Keeffe said Mr Collin’s story struck a chord with all who heart it.

“People in Ireland got to know and admire Gerry through the powerful TV adverts and films he and his family made,” she said.

“We know that Gerry has saved lives and helped many people avoid the pain, illness and loss that are caused by smoking.”

A spokeswoman for the Irish Cancer Society said they were deeply saddened to hear the passing of Mr Collins.

“Gerry showed extreme bravery and generosity of spirit in allowing us the privilege of sharing such a precious time in his life through the Quit advertising campaign,” she said.

“We are certain that as a result of Gerry sharing his honest account of being a smoker and the subsequent impact smoking had on his health, that other smokers will be moved to take action and finally quit smoking for good.”

The society said Mr Collins left an “important legacy” behind him, which would continue to highlight the dangers of smoking and save lives.