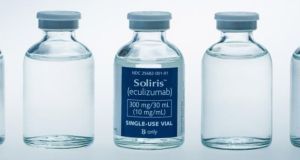 The maker of one of the world’s most expensive medicines, whose price has been described by the HSE as “exorbitant” and “astronomical”, have refused to appear before an Oireachtas committee.

Alexion Pharmaceuticals was invited to address the Oireachtas health committee today, along with other groups in the pharmaceutical sector, to discuss drug prices.

Last month, the HSE reluctantly approved Eculizumab, known commercially as Soliris, at an estimated cost of €430,000 per patient per year.

This followed a grassroots campaign supported by backbench TDs whose constituents includes a small number of people with blood disorders that are treatable with the drug.

HSE director general Tony O’Brien said the price sought by Alexion for the drug was “inordinate” and that its approval would affect funding in other parts of the health service.

Minister for Health Leo Varadkar attacked Alexion’s “aggressive” pricing policy and drew attention to its €253 million a year profits and the €12 million the company pays to its chief executive.

The health committee asked the company to make representatives available for questions by TDs, but senior vice-president Heidi Wagner wrote back declining the invitation and defending Alexion’s actions in Ireland.

In the letter, seen by The Irish Times, Ms Wagner said the presence of an individual manufacturer at a hearing on the specific issue of pricing was “an unprecedented step” for the committee and would place “inappropriate focus” on the detail of pricing agreements in Ireland and elsewhere.

“Given Alexion would be highly restricted in terms of what we could discuss with regard to pricing negotiations in Ireland as well as our global experience and position, we must respectfully and regretfully decline your invitation at this time.”

Despite numerous attempts to engage with the HSE, Alexion has not received any official communication in relation to its proposals since last November, according to Ms Wagner.

It learned of the HSE’s decision to fund additional Irish patients via a media announcement.

Alexion has played no role in the patient campaigns in the media and through TDs, she said, and limited its engagement to the HSE and other Government stakeholders.

The company, which is headquartered in the United States, employs 150 people in Ireland.