Cockroaches on walls of Dublin eatery among reasons for closures 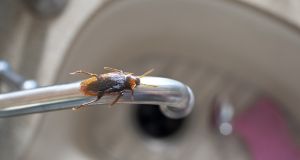 Cockroaches crawling on the wall in the main dining area of one Dublin eatery were among the reasons for enforcement orders served by the Food Safety Authority of Ireland last month.

The authority issued seven closure orders and one prohibition order on businesses after inspections, including three in Dublin.

Among them was Tasty Hut on Dorset Street in Dublin where there was widespread evidence of a cockroach infestation, live cockroaches under and behind a drinks fridge and on the wall of the main dining area.

Inspectors at Mi Thai restaurant on Manor Street in Stoneybatter, Dublin found there was insufficient food preparation space which actively resulted in raw meats being prepared and handled in the same space as high risk ready to eat foods. It found the chopping boards in the kitchen were “filthy” and “ingrained with dirt” with black mould.

At the Diner Thai and Chinese takeaway in Ongar, Dublin 15 inspectors found no running hot water to wash hands or for equipment washing or cleaning. Cleaning was poor throughout the premises and they were unable to identify appropriate cleaning products for sanitising surfaces.

At the Regent Inn, Drogheda, Co Louth inspectors found a lack of “supply of hot water available in the premises to carry out cleaning, hand washing and washing and disinfection of equipment and utensils.”

It also found that cooked pork stored was stored at a temperature of 12 degrees which was ideal “for the growth of pathogenic bacteria or formation of toxins that may pose to a risk to public health”.

There was an absence of a cleaning programme and doner meat left at room temperature discovered by inspectors at the take-away Speedo Pizza Kebab , Lord Edward Street, Limerick.

In Co Kerry, Mike Sheahan Butchers, Cahirciveen inspectors noted the internal column of the mincer had congealed stale particles of meat on it and a layer of congealed dirt was evident on the switch. The butcher blocks were ingrained with stale meat residue and were being supported by plastic crates which were ingrained with dirt.

FSAI chief Dr Pamela Byrne, Chief Executive, said all food businesses must take their legal responsibility seriously to ensure they protect the health of their customers by complying with the law.

“There continues to be numbers of food businesses who are failing to meet to their legal requirements under food law. Last month we saw food businesses fail to comply with hygiene and food storage standards and even failing to train staff in food hygiene practices. In one case there was even a widespread cockroach infestation throughout a premises.

“There were cases of inadequate refrigeration and the potential for cross-contamination too. This is not acceptable in any food business at any time, as it poses a serious risk to public health. Food businesses need to ensure that their premises has the right food safety management procedures in place to ensure pest control and best hygiene practice at all times.”

One Closure Order were served under the FSAI Act, 1998 on:

Six Closure Orders were served under the EC (Official Control of Foodstuffs) Regulations, 2010 on:

One Prohibition Order was served under the EC (Official Control of Foodstuffs) Regulations, 2010 on: Sheahan Butchers, Church Street, Caherciveen, Kerry