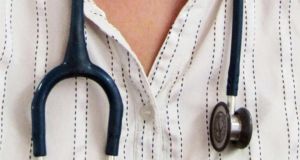 Up to a dozen women have been treated at the first dedicated clinic for sufferers of female genital mutilation (FGM) since it opened last year, according to Dr Caitríona Henchion, medical director of the the clinic. File photograph: Hugh Macknight/PA Wire.

Up to a dozen women have been treated at the first dedicated clinic for sufferers of female genital mutilation (FGM) since it opened last year.

Most have required surgical intervention to deal with the health problems caused by the procedure, according to Dr Caitríona Henchion, medical director of the Irish Family Planning Association’s FGM clinic in Dublin.

Today is UN Zero Tolerance of FGM Day. An estimated 140 million women and girls have suffered FGM, an excruciating and dangerous procedure which has serious life-long health effects.

While most of these are in Africa, global migration has ensured Ireland is not immune to the practice. Based on population and migration trends, it is estimated that more than 3,700 women in Ireland have undergone FGM in their country of origin.

Yet awareness remains low, with 65 per cent of GPs in one survey saying they were unable to identify symptoms.

Dr Henchion says her patients have displayed a variety of symptoms, including difficulty in engaging in sexual intercourse and severe period pain.

Most of the women she has seen are from Somalia or Sudan, where FGM is very common. “In general, I’ve found the women are not sure what was done to them. They don’t come from a culture where you refer to genital appearance and it was the same for all women.”

One of the main reasons women come to the clinic is that they have recently married, or are about to get married, and they are afraid they might not be able to have sex.

Most of the women seen by Dr Henchion are young, under 30 or even 25, and grew up with FGM as a common cultural practice in their families. Generally, it was carried out between the ages of five to 10 and under extreme violence.

The procedure ranges in severity from the partial or total removal of the clitoris and/or labia minora to the narrowing of the vaginal opening through the creation of a covering seal. Most of those attending the Dublin clinic have suffered the last type of FGM. All but two of the women seen at the clinic required corrective surgery in the nearby Rotunda Hospital.

Where the labia has been removed, this involves recreating the vaginal opening by cutting open and stitching back the seal made during FGM. The procedure cannot be completely reversed.

Dr Henchion says the women she has seen are pragmatic, they want to move on and advocate against FGM for their family members or children. Whether these views are representative of the wider community of women with FGM is open to question.

FGM was made illegal two years ago and has not yet featured in the courts. In the UK, where a similar law is in place for a decade, the first prosecution resulted in the acquittal of an NHS doctor earlier this week.