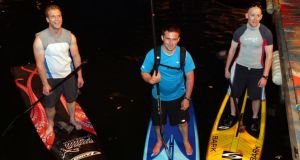 Dan Gardner, Joseph Gallagher and Dan King on their stand-up paddleboards after they arrived back at the Galway lifeboat station on Saturday following their 95km paddle to the Inis Aran Isands. Photograph: Joe O’Shaughnessy 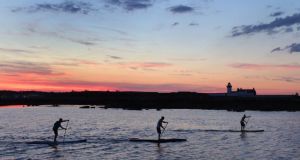 Three Galway windsurfers have set a new Irish record for stand-up paddle boarding with a 95km passage to and from the Aran islands.

Dan Gardner, Daniel King and Joe Gallagher, who are all in their late 20s, undertook the challenge to raise funds for the local RNLI lifeboat service.

In doing so, they set a record for long-distance stand-up paddling over 24 hours in Irish waters.

They set out from Galway lifeboat station at 5.25am on Saturday and reached Inis Mór by 1pm in time for lunch and a swim – returning into the docks just before 11pm that night.

A school of 40 dolphins helped to shorten the return, about halfway between Inis Mór and Black Head. “Well, we think they were dolphins, though we were half delirious at that stage, but we have video evidence,” Daniel King said yesterday. He completed a one-way paddle of the Galway-Aran route last year.

Support group
Accompanying the trio were a support group – Alan Gardner, Joe Nolan and Matt Pym – who supplied refreshments in searing sunshine and almost windless conditions, while the Galway inshore lifeboat and supporters welcomed them home.

Ciarán Oliver of Sail Galway Bay and the Galway lifeboat crew estimated that the paddle boarders covered about 4,000 strokes an hour over the 94.8km distance, which was completed in 17 hours and 33 minutes.

Stand-up paddle boarding is described as a “new” sport, pursued by surfers when there is no wind, and by sports people seeking more muscle tone.

1:45 Trump evacuated from briefing after shooting near White House

1:40 WHO: Countries in western Europe should look to avoid countrywide lockdowns