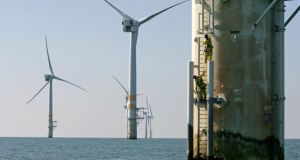 Arklow Bank windfarm. The National Offshore Wind Association, which represents several offshore operators, said there was “no doubt that planning offshore is easier, because there’s nobody living there and we’ve done our environmental impact assessments”.

Offshore wind farms in the Irish Sea now offer the best prospect of exporting electricity to Britain, as the controversial proposals for the midlands will be delayed in the planning process, it has been claimed.

The National Offshore Wind Association, which represents several offshore operators, said there was “no doubt that planning offshore is easier, because there’s nobody living there and we’ve done our environmental impact assessments”.

Revenue boost
Spokesman Grattan Healy, who is involved in an offshore project in Connemara, estimated Irish wind farms could generate €10 billion a year in revenue – more than enough to offset the import bill for oil, coal and gas of €6 billion a year.

Minister for Energy Pat Rabbitte has announced a public consultation on his department’s renewable energy export policy and development framework and the scoping of a strategic environmental assessment (SEA) of the projects planned for the midlands.

The Minister emphasised the “transparency” of this process. Proposed large-scale wind farms intending to export, he said, “must await the putting in place of this framework, which will be underpinned by an SEA”. The consultation closes on November 22nd.

Bord na Móna has also entered the fray, seeking potential partners for the development of a “clean energy hub” on cutaway bog in the midlands, with the capacity to generate 2 gigawatts of electricity for export to Britain. This could be worth €1 billion a year.

It would involve developing a number of wind farms on the company’s extensive 20,000ha of cutaway peatlands in east Co Offaly and west Co Kildare. The State-owned company has set a target of 2020 to bring this project on stream.

Far from people
One of the principal advantages of the proposal – seen as “significant” by the Minister – is that huge wind turbines would be built on cutaway bog “far away from concentrations of people” and thus would attract fewer objections.

In the meantime, offshore wind developers believe they have a head start. Their plans went to public consultation three or four years ago and the companies involved are now awaiting “imminent” publication of the department’s offshore development plan.

According to Mr Healy, some major schemes “already have consent in principle, while others are on the way”. Two projects “ready to go” are for Arklow Bank, where there are already seven turbines in operation, and Codling Bank, near Bray, Co Wicklow.