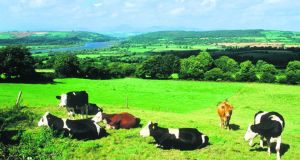 Ireland should become a global leader in encouraging countries to produce more food in a sustainable way while reducing emissions, climate change expert Bruce Campbell has said. Dr Campbell said he believed no country was taking the need for emissions reductions seriously but soon they would have no choice.

A report for the World Bank has predicted that a four degree-warmer world would result in the flooding of some 10 per cent of south Asia’s agricultural land as well as more storm surges.

“But essentially it’s going to come to the point where everybody has to get involved. That’s why I think that in the longer term Ireland, should really show leadership in terms of tackling it.”

Dr Campbell said Ireland had “a major challenge” in relation to greenhouse gas emissions because a large proportion of the total emissions came from agriculture. The agriculture sector accounts for nearly one third of overall Irish greenhouse gas emissions. “ I think you could really be at the cutting edge of the research and development in that area, but I think it should be done in partnership with a whole series of key countries.

“Bringing together a coalition of those kinds of countries which really show leadership across the whole agricultural sector would be fantastic, and I think that Ireland really has the ability to do that.”

Dr Campbell is director of a research programme on climate change and agriculture run by the Consultative Group for International Agricultural Research in Denmark. He was speaking in advance of his visit to Ireland to address a meeting on climate smart agriculture in the RDS today. It has been organised by the RDS and the Institute of International and European Affairs.