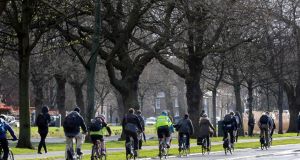 Cyclists on the Grand Canal in Dublin. Photograph: Nick Bradshaw

A British online campaign calling on cyclists to hold insurance and pay road tax has been described as “ludicrous” by Irish cycling campaigners.

The petition, which to date has been signed by more than 30,000 people and is entitled “Cyclists to hold insurance to use public UK roads”, says the UK’s roads are becoming unsafe “due to one particular community that feel they are eligible to cycle on public UK roads”.

The petition calls for cyclists to take a theory and practical test to obtain a cycling license, arguing that cyclists have no training in road safety. A note attached to the petition repeats the call for “cyclists to hold insurance and pay road tax” to use roads.

The petition says it will be delivered to UK prime minister Theresa May.

A number of people commented that they had signed the petition to highlight the fact that road tax does not exist.

“You pay an amount based on the emissions of your vehicle, so, go ahead and push your hilarious petition, as if it ‘succeeded’, cyclists would still be allowed to ride on the roads and also have to pay £0 in imaginary ‘road tax’.”

Road tax, or motor tax as it is officially known, is a legal requirement for people who want to drive their vehicle in a public place. The cost of motor tax depends on the type of vehicle you have, its engine capacity, and its CO2 emission bands.

Colm Ryder from the Dublin Cycling Campaign described the petition as “ludicrous in the context of where we are in the the climate change and emissions debate”.

“Cyclists, by nature of their transport choice, are saving the planet, making a difference and actually having a positive effect,” said Mr Ryder. “Road space is a very valuable space and bicycles do not damage the road surface. There’s just so many arguments against this proposal.”

Mr Ryder highlighted another campaign in the UK which is calling on the government to give tax breaks to people cycling to work and tax incentives for companies that invest in cycling facilities.

British paralympian Sarah Storey, who is supporting the tax break campaign, says British businesses have begun to wake up to the benefits that cycling can bring to their employees.

“It’s only right that if a company invests heavily in providing high quality changing and bike storage facilities – things that will help our nation become healthier and fitter – that they should get a tax incentive for it,” she said.

* What do you think? Let us know in the comments below.