Almost half of Ireland’s water supply is lost through leaks 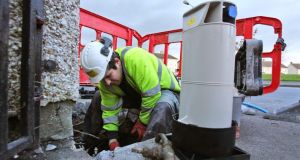 Almost half of the water supply in the State is being lost through leaks, according to the latest figures from Irish Water.

Jerry Grant, head of asset management for Irish Water, said about 800 million litres of water is being lost each day, which is 49 per cent nationally.

Mr Grant said the more than 500,000 meters rolled out to domestic properties last year are being used to calculate the leakage.

“The figures are much more accurate than they were. There will always be a degree of estimates in them because we don’t have metering of every property,” he said.

Mr Grant told RTÉ’s Morning Ireland the target was to save 2 per cent of water this year.

“We’re reasonably confident for this year (to meet the target),” he said.

Mr Grant said the company will reduce pressure in some parts of the country to reduce leakage.

“The real bull work of water conservation and leakage management is to have district meters. We have about 10,000 of them across the country.”

Mr Grant said many of these meters did not work properly and were audited last year.

“Without them it’s like a needle in a haystack looking for leaks,” he said.

“ There is no silver bullet solution. This effort will have to be maintained indefinitely.”

In figures released to RTÉ news, most local authorities said they are losing about 40 per cent of their water supply through leaks.

The report shows areas losing more than half their supply to leaks were Cork city, Co Cork, Tipperary, Mayo, Kerry and Roscommon.