Why studying abroad can be a viable option 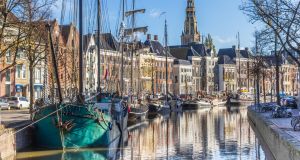 Groningen. ‘There is a lot of interest in Dutch universities: they have high-ranking courses.’ Photograph: iStock

The CAO has an almost hallowed air, but going to college abroad can be a particularly rewarding, more accessible and often cheaper option than staying in Ireland.

Studying in Europe has traditionally been attractive to budding medicine or veterinary medicine students because the courses generally have lower entry requirements but, increasingly, it’s appealing to students with different interests.

Jordan Walsh, from Waterford, is a second-year game design student at the Hanze University of Applied Sciences in Groningen, the Netherlands. “My guidance counsellor asked me where I wanted to go to college: Waterford? Dublin? Cork? Limerick? I just kept saying no. But then she asked: ‘what about abroad?’ and it clicked.”

The Netherlands was a good option, he says, because it’s close to home, safe and has an excellent cycling infrastructure to get around in. The costs are significantly less than in Ireland, and Dutch people have a high standard of English (whereas most Irish people don’t have a word of Dutch).

“I was nervous when I started off in a foreign country. Groningen is much bigger than Waterford, and there was a bit of a culture shock, particularly with the amount of bikes. I adapted fairly quick and made friends with other international students who were in the same boat as me. The course is in English and everyone here is fluent in English so, even if you try to speak to them in Dutch, they just reply in English.”

Walsh is one of about 1,000 Irish students who have chosen to go to third level in the Netherlands, but others are on courses in Poland, Denmark, Italy and Germany. The UK remains a major destination for Irish students, but guidance counsellors say that Brexit and, more so, high fees are making it less attractive than it once was.

Michael O’Shaughnessy is head of careers at St Columba’s College, a fee-paying school in Rathfarnham, Dublin where about 60 per cent of the students go abroad for third level. The UK and the Netherlands are the prime destinations. “There are good universities in Ireland but also some very good ones abroad,” he says. “There is a lot of interest in Dutch universities: they have high-ranking courses, the standard of English is excellent, many courses are delivered in English and the cost of accommodation in places like Utrecht and Maastricht can be quite low compared to Dublin: you might pay a minimum of €600 a month for a basic room here compared to a nice space there for €300 or less.”

Tuition fees in Europe can be significantly lower than the Irish third-level registration fee: £1,820 (€2,000) in Scotland, and €2,060 in the Netherlands, although they can go as high as £9,000 ( about €10,000) in England. There are 11 medical schools teaching through English in Italy, where fees begin at €600 for students from less wealthy backgrounds and rise to €4,000 for those with more money. Flouche says that many Irish students are currently applying to pharmacy, medicine and business courses in Rome. In Finland, there are no tuition fees at all. In Poland, tuition fees can be as high as England, but this can be offset by the significantly cheaper cost of living, including cheaper rent.

“It can be a lot easier to access high-quality education in Europe,” says Guy Flouche, director of Eunicas, an organisation that supports and advises students who go abroad. “EU citizens can access high-quality courses in the Netherlands and other countries that might require very high points here.”

If it’s easier to get into a course, does that mean that the standard of teaching might not be as good and that, ultimately, their degree might have less value? “We make the mistake here of equating high points with high quality, when actually Dutch universities have more highly-ranked universities than we do here; they simply have more places and less fierce competition than in Ireland. And high points are not always a predictor of success. In the Dutch system, it’s all credit based, so you have to get a certain amount of credits per year – and if you don’t, you’re out.”

But, for all these benefits, isn’t it hard to leave home and move abroad for study at the age of just 18? “Not all students are ready to go abroad at the age of 17 or 18,” says Flouche. “Levels of confidence and resilience need to be considered. Ideally, the student might have some experience of having travelled abroad before. The academic year can be a little longer and the workload higher, so they need to work hard. In the Netherlands, a lot of teaching is focused on problem-based learning and students do have to take responsibility for their own learning. There can also be some cultural differences, and it might take a while to get used to different senses of humour.”

Some students might feel ready for independence, but it’s a different story when they’re so far from home. “We have boarders in this school,” says O’Shaughnessy. “Many who go overseas are excited about going overseas, but others do know that they want to stay closer to home. For those who do go, there is a greater emphasis on wellbeing than ever before, and colleges overseas know that they have a duty of care. So while there can be challenges, challenges can also be good for us.”

Ultimately, however, potential students won’t really know whether studying in a European university is the right call for them until they pay it a visit. “Students will sometimes decide to go overseas after the Leaving Cert results, but ideally you need more than two or three week to get your head around it,” says Flouche. “OMG We’re Going Dutch is a series of events in Cork, Galway and Dublin where Irish students can talk to academics in Dutch universities as well as meet Irish students who have made the decision to study in the Netherlands. Personally, I find the most useful engagement is for someone to visit the university and be a student for a day, and most of them will facilitate this.”

“The excellent website Eunicas.ie has comprehensive country-by-country and subject-by-subject information on available English-language courses, as well as, crucially, a list of closing dates for applications.”

“I’m about to finish up on a four-year bachelors degree in international relations and organisations at the University of Groningen. I decided to go abroad because, having lived with my family in Singapore for a few years before I came back to Ireland for fifth year, I knew that I liked seeing different places and meeting new people.

“I moved to the Netherlands with three friends who attended Bruce College in Cork with me, and it did make it easier not to come alone. I was still a bit nervous; it’s very different to living at home with your parents. But the large Irish and international communities made it very easy to feel at home.

“English is widely spoken. My sister is in her second year at UCC and it is definitely cheaper here. I’m not wild about the food, but it has been easy to settle down here. It feels like home.”

Should I stay or should I go?

– Tuition fees in some EU countries (including the Netherlands) are significantly cheaper than in Ireland, or even free (Finland).

– The cost of living, especially rent, is often lower.

– Courses and textbooks in many European universities are in English.

– European universities don’t care about points: they have very different admission criteria which can unlock courses that are extremely competitive in Ireland, including medicine and veterinary science.

– Studying abroad is a chance to experience independence and to meet new friends from a diverse range of cultures.

– Tuition fees in some EU countries, including England and Poland, can be very high.

– At the age of 17, 18 or 19, a student who has never lived away from home might find it a struggle to be away from family and friends – homesickness can he hard.

– Initial culture shocks mean that students have to make big adjustments from the outset of their course.

– The academic demands of some courses can be tougher in Europe, and students are advised to do thorough research before committing.

– It’s always a good idea to go to an open day before deciding to attend any university, but this does mean an initial outlay on flights or boats.

– Different countries have different closing dates, although Eunicas can help students to manage their applications. 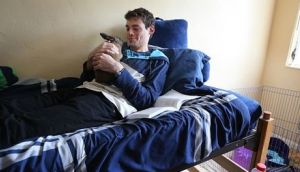