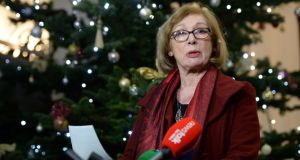 Minister for Education and Skills Jan O’Sullivan: wants clearer guidelines on how ‘standalone’ Catholic schools intend to accommodate children of other faiths and none. Photograph: Eric Luke

School admissions policies run on a “Catholic first” basis may be in breach of both equality legislation and the Constitution, the State’s equality watchdog has been told.

A report commissioned by the Equality Authority – now part of the Irish Human Rights and Equality Commission (IHREC) – argues that article 44.2.4 of the Constitution puts an onus on Catholic schools to demonstrate exactly why positive discrimination in admissions is necessary to maintain their ethos.

The report, authored by Fergus Ryan, a lecturer in law at DIT, says: “In relation to the Catholic First policy, there is certainly at the very least a case to be answered that in its potential application to schools in receipt of state funding, the policy may be in breach of the Constitution . . . by excluding children from state-funded schools on the basis that they intend to exercise a constitutional right not to attend religious instruction therein.”

The report stops short, however, of recommending the authority take a test case on the issue.

Article 44.2.4 states that “legislation providing State aid for schools shall not discriminate between schools . . . nor be such as to affect prejudicially the right of any child to attend a school receiving public money”.

Mr Ryan says the key point of law is that each school patron, or board of management, must show that it “is not merely desirable [in the eyes of the Catholic Church] but that it is essential to discriminate in order to maintain the school’s ethos”.

Fr Michael Drumm, chairman of Catholic Schools Partnership, the bishops’ education wing, said any suggestion that its admissions policies were unconstitutional were “speculation” in the absence of a test case.

He pointed in turn to constitutional protections allowing faith-based organisations to run their own affairs.

The IHREC said it was awaiting the outcome of a Supreme Court case on alleged discrimination against a Traveller at a Christian Brothers’ school in Clonmel, Co Tipperary before bringing further legal challenges on admissions policies. The Supreme Court is due to deliver its ruling this year on the case, which could have far reaching implications for the Equal Status Act.

Speaking to The Irish Times in a personal capacity, the chairman of the forum on patronage and pluralism Prof John Coolahan said “there needs to be a carrot and a stick” to deliver change. Asked what sort of stick could be used, he suggested that grants might be cut in locations where schools refused to change patronage.

The Department of Education carried out surveys in 43 areas following the forum’s report in April 2012 and identified parental demand for change in 28 of them.

To date just one school – a Church of Ireland primary school in Co Mayo – has transferred to another patron, although two Catholic schools merged in Dublin 8 to create a vacant building for Educate Together.

Minister for Education Jan O’Sullivan is seeking to accelerate the divestment process. She also wants clearer guidelines on how “standalone” Catholic schools – those in areas where there is no parental alternative – intend to accommodate children of other faiths and none.

It is been suggested, for example, that religious instruction might be timetabled either at the start or at the end of the school day to allow non-Catholic pupils to opt out with little fuss.

Fr Drumm said the church would early this year publish “a statement that will guide schools in best practice”. While he wouldn’t be drawn on the contents, he said it was due for publication in the spring, and he stressed that Catholic schools were already inclusive in nature.