Murder inquiry begins after body of woman dead ‘since 2015’ found 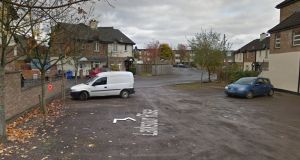 Marie Conlon’s body was found by PSNI officers at her home at Larkspur Rise (general view above) in west Belfast after concerns were raised about her whereabouts. File photograph: Google Street View

The PSNI has launched a murder investigation after the discovery of the body of a woman in an apartment in west Belfast who may have died more than two years ago.

Detectives are questioning a 23-year-old man about the death of 68-year-old Marie Conlon, whose body may have lain undiscovered since January 2015.

Ms Conlon’s body was found by PSNI officers at her Larkspur Rise home after concerns were raised about her whereabouts. Officers forced entry and found her lying in a bed in her flat.

“It was apparent that she had lain undiscovered for some time,” said Det Chief Insp Alan Dickson.

Detectives investigating the circumstances of her death established that the last known sighting of Ms Conlon was in January 2015.

“It is our belief supported by the medical evidence that her death may have occurred around this time,” said Det Insp Dickson.

A postmortem suggested the death may have been suspicious. The 23-year-old man was arrested on Wednesday and remains in custody.

Because of the condition of the body, police have now arranged for a second and more specialised postmortem to try to provide more information about how Ms Conlon died.

She lived in a small, private block of apartments at Larkspur Drive, off the Suffolk Road in west Belfast. It is understood she had lived alone.

Forensic officers continued to examine the scene on Thursday. They took away a number of evidence bags from the apartment. Ms Conlon’s personal effects and records are also being examined and it is believed police are also checking whether her credit cards were used in the past two years.

Ms Conlon’s family said it was “shocked and heartbroken” to learn of her murder. “The tragic circumstances of her death make it all the more difficult to comprehend and accept. Marie was very much loved by her family and will be mourned greatly,” it said in a statement.

It said Ms Conlon was a very independent person. “Numerous attempts had been made to contact her in person, and by other means, over the course of the past two years but at no point were suspicions raised that she had been deceased. It is only with hindsight that the unimaginable now seems possible,” the family added.

“We have been working closely with the PSNI to bring this devastating situation to an end. We hope and pray that justice will be done and ask for privacy as we grieve the loss of our sister.”

Local SDLP councillor Brian Heading said local people were in shock following news that Ms Conlon may have been murdered and her body remained undiscovered for so long.

“This was a heinous crime against a vulnerable member of our community,” he said.

“My thoughts and prayers, and those of my party colleagues, are with the woman’s family at this extremely distressing time,” he said.

“One of the tragedies, I suppose, of modern living is that in areas like this you don’t have the same sense of connectedness that you would have had if she had lived in a house further into the estate,” he told the BBC.

“This type of accommodation is very transitory, there’s people coming and going all the time. I just find it tragic, the whole episode,” added Mr Walsh.