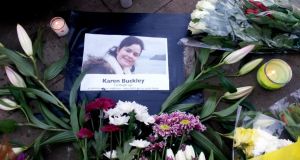 The family of murdered Irish student Karen Buckley will on Saturday travel to Scotland to bring her body home to Co Cork.

Ms Buckley’s parents, John and Marian, received confirmation on Friday from the Irish Consulate in Edinburgh that the Scottish authorities were releasing her body.

It’s understood that Ms Buckley’s family will bring their daughter’s body back to their family farm at Glynn in Mourneabbey for rosary with relatives, friends and neighbours on Sunday.

Her remains will then lie in repose at O’Connell’s Funeral Home, Mallow, from 4pm to 8pm on Monday before being removed to the church in Analeentha in Mourneabbey.

A funeral Mass will be held at the Church of St Michael the Archangel, Analeentha at 2pm on Tuesday before burial at St John’s Cemetery in nearby Burnfort, also in the parish.

Ms Buckley disappeared while out with friends at the Sanctuary Nightclub on Dumbarton Road in Glasgow around 1am on April 12th.

It had been hoped that her body would be repatriated on Wednesday, but a postmortem requested by a man charged with her murder and scheduled for Wednesday was postponed.

However, this second postmortem sought by lawyers for Alexander Pacteau (21) took place Friday morning and Ms Buckley’s body was then released to the family.

Officials from the Irish Consulate in Scotland will be in Glasgow to meet the family having already cleared the necessary paperwork for Ms Buckley’s repatriation.

Meanwhile, Mr Pacteau, has made his second appearance at Glasgow Sheriff’s Court.

Mr Pacteau entered no plea or declaration to the murder charge or a second charge of attempting to defeat the ends of justice.

He was further remanded in custody.