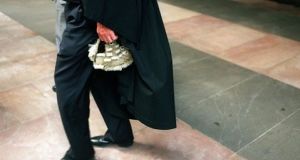 The judiciary contemplated suing the government over cuts to judges’ pay during the financial crisis. File photograph: Getty Images

The judiciary contemplated taking “the nuclear option” and suing the government over cuts to judges’ pay during the financial crisis, it has emerged.

The move, which would have created a public stand-off between the executive and the judiciary, went as far as legal advice being sought in 2013 from a prominent barrister.

The judges were told they had a “strong case” and many believed they would win, according to a new book on the Supreme Court by former legal affairs correspondent with The Irish Times, Ruadhán Mac Cormaic.

The Association of Judges in Ireland, which was set up in response to the pay crisis, heard arguments from both sides as to whether the case should be taken. “People were very, very nervous about it. Others were not. Others said: bring it on,” according to a source quoted in the book. The judiciary was aware that “by suing the State the scene would be set for a sensational public stand-off between two arms of government”, the book says.

In the event, the executive committee of the judges’ association decided to negotiate with ministers, and ultimately won a pledge that the differential between what new and already-appointed judges were being paid, would be phased out with the passage of time.

Some judges, dismayed by the association’s decision not to take the case, threatened to take it themselves, but never did. During the tense dispute between the government and the judiciary, which lasted from 2009 to 2013, senior politicians were struck by how bad the judges were at lobbying, according to the book.

It also says that at a summer meeting of judges in Farmleigh, beside Dublin’s Phoenix Park, the judges of the High and Supreme Courts were divided over whether they should issue a public statement but in the end decided not to. At a later tense meeting of Supreme Court judges in the Four Courts “several shouted at each other across the conference table”.

The then chief justice, Mr Justice John Murray, and the frontrunner to replace him, Ms Justice Susan Denham, were against issuing a statement but Mr Justice Hardiman and others wanted to. The meeting was, according to the book, “one of the most difficult anyone could remember”.