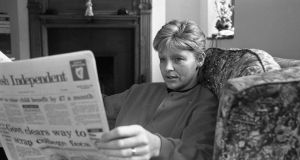 Regarded a watershed moment in Irish crime, the murder of Veronica Guerin, 20 years ago this weekend, focused attention on organised crime like never before.

The period immediately after the crime journalist’s killing, on June 26th, 1996, was characterised by a clampdown on gangs, and the establishment of the Criminal Assets Bureau. The agency took multimillion-euro settlements from many leading gang leaders, but others relocated abroad, out of its reach. Some of them have been supplying the Irish drug market ever since.

At home the gangs they supplied benefited hugely from the higher disposable incomes of the boom years, with unprecedented numbers using so-called recreational drugs.

That money brought rivalry and feuding, and what has emerged is an underworld cycle where most gangs rise and fall within 10 years.

One group still bucks that trend: the international syndicate led by the Spain-based Dubliner Christy Kinahan, which remains the biggest supplier of drugs to Irish buyers.

The 10-year cycle has seen many of the leading figures on the domestic crimescene murdered. Several others have been jailed.

The Westies – Coates and Suggs: Shane Coates and Stephen Sugg were leading figures in the collective of drug dealers from Blanchardstown, in west Dublin, from the late 1990s known as the Westies. They fled to Spain in late 2003 after a shoot-out with gardaí in Cavan at a house where they had been storing stolen guns. Sugg’s 23-year-old brother Bernard had been shot dead. They were abducted in Alicante in January 2004, probably by rival Irish drug dealers. Their remains were found buried under a warehouse four years later. Both Coates, who was 34, and Sugg, who was 27, had been shot in the head.

Christy Kinahan: Christy Kinahan’s Spain-based cartel has been the biggest shipper of drugs into Ireland for 15 years. Perhaps uniquely among the group of gang leaders to have emerged since the murder of Veronica Guerin he has built a drug gang that has endured to the present day. The Cabra man, who is in his late 50s, appears to be staying ahead of his enemies and out of prison while earning vast sums of money. But the feud he is now involved in with the Hutch faction in Dublin means that the Garda and his rivals are focused on him like never before.

Marlo Hyland: From Cabra in Dublin, Marlo Hyland was already involved in organised crime before Veronica Guerin was shot dead. In September 1996, already a drug dealer, he emerged as chief suspect for the shooting dead of his sister Julia’s husband after his release from prison for Julia’s drunken killing by strangulation. Hyland took over the Finglas-based crime gang headed by his associate PJ Judge when Judge was shot dead, in December 1996. Under Hyland’s control the gang became so big that by 2005 the Garda set up Operation Oak. The intense Garda and media scrutiny saw his own gang shoot him dead in a house in Finglas in December 2006. He was 39.

Eamonn Dunne: When Marlo Hyland was shot dead, in December 2006, one of the key people in his gang, Eamonn Dunne, took control. Under his reign the gang continued to sell drugs supplied by the Kinahan gang. It killed 11 people: members of rival factions and other associates of Dunne’s. That killing spree ended only in April 2010, when Dunne was shot dead in a Cabra pub. The murder of the 36-year-old has never been solved, but gardaí believe he was targeted by the Kinahan gang because his killing spree was destabilising the Irish drug market.

Wayne Dundon: The leader of Limerick’s McCarthy-Dundon gang was embroiled in a bloody feud in Limerick involving at least 15 murders. Among them was the killing, in November 2002, of Brian Fitzgerald, head of security at a nightclub in the city. In November 2008 the gang shot Shane Geoghegan dead in a case of mistaken identity. And in April 2009 the businessman Roy Collins was shot dead because his family gave evidence against Dundon for wounding Collins’s stepbrother Ryan Lee when he refused Dundon’s 14-year-old sister entry to the family pub. Dundon, who is 37, is serving a life sentence for Collins’s murder.

Alan Ryan: Alan Ryan was the leader in Dublin of the Real IRA until his murder, in September 2012. Gardaí regarded him as a glorified gangland figure who used dissident republicanism as a cover for his propensity for violence and crime. After he was killed some of his associates were shot, apparently on the orders of leading Northern Ireland dissidents. The 32-year-old, from Donaghmede, tried to extort some of the Republic’s biggest gangs using shootings – some fatal – and other violence. His 25-year-old brother Vincent was shot dead in April this year, probably by the same gang figures who killed his older sibling.

Christy Griffin: The leader of a major north Dublin robbery and drug gang with its nucleus around Sheriff Street, Christy Griffin saw his power base shattered when he was exposed as having sexually abused a child. Some of his gang remained loyal; others turned against him, leading to a protracted feud in the inner city. Six men died in the ensuing violence. The 47-year-old remains in prison, although his jail term was cut from the life sentence imposed in 2007 to 15 years in 2011. He controlled much of the drug dealing in the north inner city, and the members of his gang were prolific armed robbers.