Opinion: It is possible to live a very comfortable life on €170,000 a year 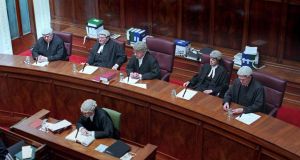 Then they both started to talk about wine, and a particularly good wine which came from a small vineyard in the south of France owned by a colleague, and whether the wine at the King’s Inns was good enough. It’s not easy, being a mendicant friar. . . with a taste for fine wine.

However, two eminent judges,the Chief Justice, Mrs Justice Susan Denham, and the president of the High Court, Mr Justice Nicholas Kearns, have raised an important issue in letters to the Government published in this newspaper on Tuesday in a story by Ruadhán Mac Cormaic.

They argued that reduced salaries are making the High Court a less attractive proposition and that there may be a dearth of applications for forthcoming posts. The Chief Justice has pointed out that the reduced salaries create a particular difficulty for High Court judges whose family homes are outside Dublin. She has asked that the Government allow her to pay their travel and accommodation expenses out of Courts Service funds. The Government has said no.

Now, who is right here? The Chief Justice said the Government’s decision “may well contribute to a ‘second-best’ judiciary in Ireland” and that it will mean the High Court becomes more Dublin- based.


High-flying barristers
Another very thoughtful legal eagle pointed out to me one of the dangers of having a second-best judiciary: that high- flying and high-earning barristers would be able to run rings around the unfortunate judge in the courtroom, and that just such a scenario was being talked about openly in the Law Library.

But is the State to be held to ransom by high-earning barristers? Are we to accept that unless the State pays more than it can afford, top barristers won’t apply to be judges and will run rings around the “second-best” judge in the courtroom? This is a bluff that needs to be called. I know that many former barristers took a substantial hit to become judges, some dropping to as little as a quarter or a fifth of their former earnings.


Honour and prestige
They did it, many will tell you, for the honour and prestige of being a judge and becoming part of the third branch of the government of Ireland. Is that honour lessened because a High Court judge’s accommodation and travel expenses are not paid? And are the few high earners always necessarily the best lawyers, and do they necessarily make the best judges?

There must be many barristers and solicitors with experience, and on relatively modest incomes, who would make good judges. Indeed, maybe those who lead more modest lives would have a better understanding of what life is like for many citizens who come before their courts.

The time may have come for us to look at how we choose judges. At the moment the Judicial Appointments Advisory Board accepts applications and then sends an unranked list of recommended candidates to the Government. The Government then has the freedom to pick its favourite candidate or to choose someone not on the list.Then the President, on the Government’s advice, appoints them judges.

And a last point: if the State wants to widen the pool of judges, the State has to invest seriously in training them – something it has dismally failed to do, cutting the budget in half last year. Some cuts are justified. Some cuts are not.